A twitter based leak today morning revealed pictures of the upcoming Nokia latest Windows 8 Phone the Lumia 920. It's believed to be a 4.5 inch screen that Nokia Lumia 920 boasts of with PureView. Three pictures have been revealed in colours gray, yellow and red with three buttons in the bottom of the phone which is supposedly the Nokia's latest Windows 8 phone Nokia Lumia 920. 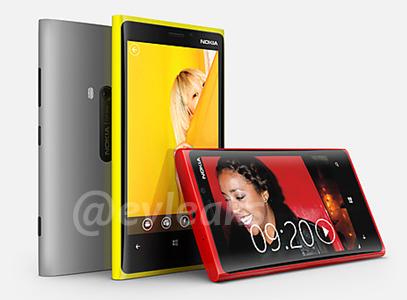 Another rumour is the leak of picture of Nokia Lumia 820 with PureView. This will be a 4.3 inch screen and will have fewer features in comparison to the Nokia Lumia 920.

What is exactly PureView?

How far is the rumour true?

There is every possibility that the rumour and the leak about Nokia's latest Windows 8 phone are true. This can be supported by the fact that recently in YouTube Nokia displayed an advertisement with a woman riding a bike and stopping mid way saying "Things are about to change". The caption covers that the change is about to come on the 5th September, 2012.
So we can just wait with anticipation for the latest news on Windows 8 Phone by Nokia- Nokia Lumia 920 and 820 which not just is exciting but seems quite promising too.