How does an Antivirus work?

Antivirus is thus the prime line of defense which operates to eliminate and destroy malwares. Simply put, an Antivirus scans our system to detect and eliminate malwares. Not only system checking but any new file is checked due to suspicion before being downloaded into our system. There are Two major approaches on which an antivirus works. They are 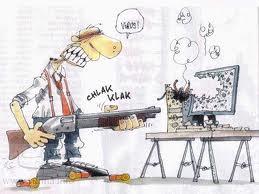 Dictionary is a book where we generally look out for meanings and definitions of things. Similarly an Antivirus Dictionary is a file which contains Virus definitions. During a system scan by the Antivirus, system file codes are compared to virus definitions in the dictionary to find out if it is a virus. If the file contains a virus code then the user is intimated about it. Then the user has to decide on to whether the file has to deleted or quarantined or repaired.

It's a quite faster approach of finding viruses as they can be done when any file is opened, executed and closed by the operating system. But the prime necessity with this approach is its daily updates. Every day there are about thousands of new viruses appearing that outdated dictionaries can't possible detect or eliminate these new viruses upon encountering them if the dictionary does not have a definition of them. So this is the reason why we are asked to Update our Antivirus software regularly.

Although this is considered a very effective method, it still fails in case of oligomorphic, metamorphic and polymorphic viruses, which have the ability to morph their identity to the software.

As the name suggests, this method is based on suspecting the behavior. For example let's say an unknown process running in our system is trying to modify the FAT or writing data into some executable. This definitely triggers suspicion. Thus this method can provide protection against new viruses. In case of Dictionary approach the virus has to list in the dictionary.
But the major problem with this approach is the number of False positives. Thus with more and more warnings the user tends to ignore them and thereby occasionally allowing viruses to destroy our systems.

Both Dictionary and suspicious behavior approach are used in combination in today's Antivirus software to detect, remove and prevent malwares.

Some Ant viruses emulate the beginning of the code of each new executable found that is going to get executed before transferring the entire control to that executable itself. If the program has any self modifying or self replicating code or trying to find out other executables then we can say that the executable has been infected. But even this method has a lot of false positives.

In computer security, a sandbox is a security mechanism for isolation of running programs.

It's for testing an untested piece of code which can be an untrusted program. It does this by tightly controlling the resources given to this untrusted program to run. In other words it just acts like Our Operating system and runs the untrusted guest programs. After running the program, the sand box is examined for any changes having nature of viruses. This method has a high performance overhead thereby limiting their usage to On-Demand scans.

There is no method which is 100 percent accurate and protective. Anti viruses as such use combinations of the above said methods to protect the system. The more amount security fixes brought into any system or OS the less will be the chance of intrusion. Experts say that LINUX is a secure OS because of its complex file systems and the complex access mechanisms. If Microsoft tries to make such security fixes in Windows too then there would be more protection.

Recently the prominent supplier of cloud security products has announced its new product- Panda Antivirus Pro 2012 which can support the Microsoft Windows 8 Consumer Preview. This is certainly going to increase in the reputation of Panda’s concern among the millions of online users in the 195 countries worldwide. Let us read in this article, what this Panda Security Pro 2012 is offering to Windows 8.

This article contains detailed information about Windows 8 compatible antivirus. Read this article to learn the best antivirus for Windows 8.

Read this article to know the best security apps- antivirus, encryption softwares and more for your Windows 8 devices. Read our review and choose the best app according to your needs.

Updated to Windows 8 but still irritated by the low immunity of Windows 8 towards malicious softwares? Then its time to know the best Antivirus softwares in market for Windows 8 that offer you the best security for no price.

working pricple of antivirus is great effort in security.it is great article about antivirus.