The accelerometer is a new technology that has upgraded the user's experience in touch screen smart devices like mobiles and tablet PCs. The main function of this is to adapt the orientation change when the position is changed from vertical to horizontal and vice-versa. This technology actually measures the orientation change and positions the screen, so that the user gets comfortable with the viewing experience. If you are reading an e-newspaper, it will be a very nice experience if you read it in landscape view rather than conventional portrait mode. When the screen is tilted horizontally for landscape view, the function of the smartphone accelerometer is to sense this change and adapt the screen accordingly. Along with this, this feature helps the developer to make games and other apps user friendly. If you are playing racing games, it will be better if your car changes/steers itself when you tilt your phone or device. This is possible by this new technology. Initially, this feature was added to the iPhone but nowadays, most mobile manufacturers try to adopt this technology. So, in short, a smartphone accelerometer is a device to gauge or measure the phone/tablet's orientation - tilt or landscape or portrait. Hence we can say that this is one of the coolest features in any smartphone.

The smartphone accelerometer contains a circuit having 'Seismic mass' (made up of Silicon) and it goes on changing its position according to the orientation change and 'housing' attached to the device's circuit.

Actually a smart device with an accelerometer is nothing but a circuit based on MEMS(Micro Electro Mechanical System), that senses or measures the forces of acceleration that may be caused due to gravity of movement or tilting action. So, it is a device to measure the speed of acceleration or movement to which it is attached. If it is employed in mobile, it will do accordingly. It also senses the angle at which it is being held via mobile. 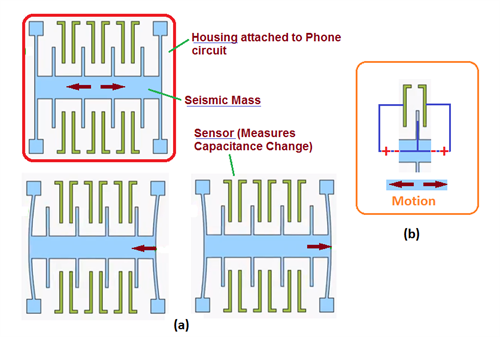 Figure (b), a cutout of figure (a), shows a change in capacitance as a result of the change in position of Seismic mass when a smart device is tilted or changed in orientation. This will recognize the change in gravitational pull by changing the current equivalent to capacitance change. This is the working principle of the smartphone accelerometer.

An accelerometer is also used in many devices like a laptop for detecting drops. Whenever any drop is detected, it signals the hard disk's heads and they are parked or stopped to avoid the data losses. Hence for data security, an accelerometer plays an important role.

The acceleromters in mobile phones are always a subject of curiosity and this article has nicely explained the principle and functioning of it.
The accelerometers are used in many areas like ship navigation, finding angle and azimuth for direction and trajectories of oil wells in petroleum upstream sector and many other areas where we have to find out the position with respect to verticle and direction quadrants.