How to buy Samsung Galaxy S III in India

Even though Samsung announced their Galaxy S III phone a few weeks ago, it is still not available worldwide for purchase. This super smart phone will be available for booking in various countries at various times. According to the reports, the release date for Samsung Galaxy S III in India is June 2. If you want to buy Samsung Galaxy S III in India, you can pre order now but still have to wait several days before you can get it in your hand. Read this article find various options to pre order your favorite smartphone in India.

If you don't want to wait until the Samsung Galaxy S III comes to the Samsung shop near your home, you can pre order it now and be assured that you will be considered when the device actually arrive at the stores. To pre book the phone, you have to pay Rs 2000 at the Samsung eStore in India. The remaining amount need to be paid only when the device is launched and ready for shipping in India. Learn pre book Samsung Galaxy S III in India. 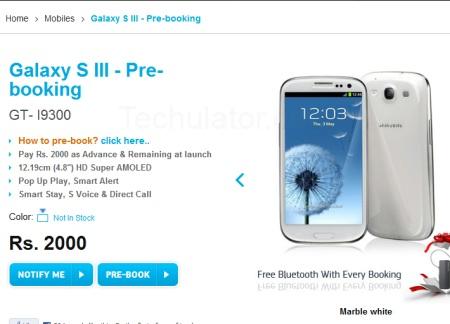 If you book the Samsung S III phone through Samsung India eStore, you will get a free bluetooth with it. Who don't like some free goodies?

If you don't want to wait for the Galaxy S III until it is officially launched in India, you may choose to buy it right now from eBay. Samsung has not officially announced the price for this phone but is expected to be about Rs 35,000. However, it is currently sold in eBay India for a premium.

This is a 16Gb model and is available only in white color.

Please note that they will not ship the item until the product is launched in India on 1 June 2012. The seller warns that shipping may be delayed couple of days and possible date of dispatching is 3 June.

I think this seller has pre booked many units or has access to some Samsung dealers from where he can buy many units on the launch date and sell through eBay.

If you are in a hurry to try the Samsung Galaxy S III on the launch week itself, you may go for this option. If you can wait couple of days or week, then I recommend you wait and you can get it much cheaper from an Android store or Samsung store in India.

If you want to get your own Galaxy S III phone but cannot pay almost one month salary for it, then your best bet is to buy a used phone. You don't need to wait a year to get a used Samsung Galaxy S3 phone. There are lot of bloggers and reviewers who buy the phone at a premium price, use it for few days to review it extensively and then sell it at a much lower price. You could get up to Rs 5000 discount for this Samsung Galaxy phone if you buy it from bloggers and reviewers. The best place to look for offers to sell the S3 at discounted rates is Facebook, eBay India and Android blogs. You may have to wait couple of weeks before you can really see used Samsung Galaxy S III phones listed for sale.