Lava International Limited is one of the popular manufacturers of smartphones in India. Now, the company has come up with its latest tablet called Lava Z7C+, with calling functionality. The company already has released four tablets that are Xtron, Xtron+, Connect and Z7S. The Lava Z7C+ is the latest addition to its eTab portfolio.

Earlier this year, we have seen Lava Iris 504Q smartphone with gesture controls, which has gained much popularity for the company. It is being packed with solid specifications and promising features at an affordable price. In this article, let us have a quick look at the specifications, features, price and availability of the newly launched Lava Z7C+ 3G Calling tablet, below. 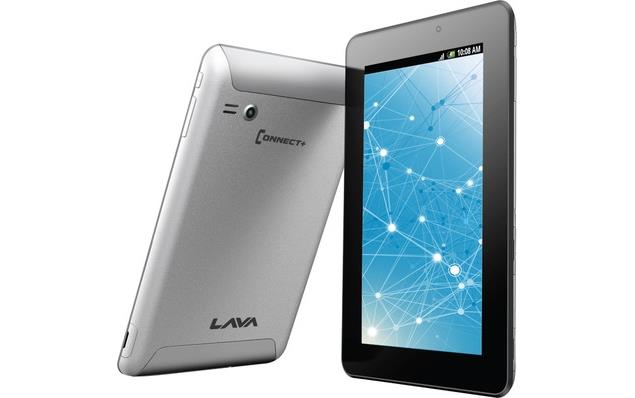 The display size of Lava Z7C+ is 7.0-inches. The display type is a capacitive WVGA touch screen display with a resolution of 800x480 pixels. The device could offer decent views at different angles with these specifications and the tab is 9.8mm thick.

The Lava E-Tab Z7C+ runs on Android 4.0 (Ice Cream Sandwich) OS, which is not the latest version of Android. Under the hood, the phone is powered by a 1 GHz Qualcomm Snapdragon processor.

Moving on, there is a 512MB RAM fused with the device, which is a bit low when compared to the most of the current tablets. The Lava E-Tab Z7C+ comes with an internal storage capacity of 4 GB that can be further expanded up to 32 GB by using a microSD card.

For camera, the device has dual cameras. There is a 2.0-megapixel shooter at the back. Also, it has a 0.3MP (VGA) front-facing camera that aides for making video calls.

On the connectivity front, the Lava E-Tab Z7C+ supports many features. One of the highlighting features of this tab is that it comes with SIM card slot and supports 3G calling. Moreover, it also supports other usual features like Wi-Fi, Bluetooth 3.0, GPRS, EDGE, 3G and GPS.

The company has pre-loaded this tablet with a bunch of apps, games, education and entertainment content apart from Skype.

The battery backup is very important for any electronic device. When it comes to battery capability of Lava E-Tab Z7C+, it is being packed with a powerful 3000 mAh battery, which is expected to give 5 hours of battery life on a single charge with normal usage. Surely, it could procure long lasting battery backup.

Are you pleased with all the above mentioned features and specs? Then, you may be eager to know its price and availability details. The Lava E-Tab Z7C+ tablet is being priced at Rs. 8,499 and you can buy it through various online shopping portals like Flipkart and saholic. But, Saholic is offering the same at a bit high price of RS. 8,599.

The specifications of Lava E-Tab Z7C+ are very similar to the E-Tab Connect, which is currently available for Rs. 8,150. This all-new tablet comes with built in SIM slot with voice call support, 3G connectivity and other common features. It is worthy to buy for those who don't bother about the price for its common specifications. I personally, won't recommend it to buy, because of its outdated OS and common specs.

A review of Lava e-Tab Z7H Android tablet and also find detailed specifications of this tablet.