Lenovo is a type of brand that is well known for its cut-throat pricing. Since it stepped into smartphone business, we have seen a lot of quality devices from the company. As 4G starts rolling out across the nation, manufacturers are busy in making budget friendly devices that support the new network standard, so is Lenovo. The company has added another budget friendly smartphone to its entry-level segment with the inclusion of the 4G LTE enabled Lenovo A6000, which is priced at Rs 6,999. The device is endowed with a lot of features apart from 4G Connectivity, giving competition to the likes of Yu Yureka and Asus ZenFone 4. Lenovo A6000 is the cheapest 4G LTE enabled device you can get at this time. However, still the competition is too strong. Let's find out if the company managed to bring in its A-game with this brand-new budget friendly device.

Lenova A6000 has a very light weight profile, weighs at 128g, and it looks quite thin as well, measuring 70x141x8.2mm makes it sleek and stylish. The front of the device is mostly occupied by the massive 5-inch IPS display. Below that massive screen, instead of going with onscreen buttons, here the manufacturer used capacitive touch buttons so that one can make use of the entire screen estate. As usual, above the display, there's a 2MP Selfie camera along with an array of sensors. A micro USB port and 3.5mm audio jack is positioned on the top, which could be very convenient if they are placed on the bottom side. The volume rocker and Power button are conveniently positioned on the right side. The device comes in four-color options to choose from - Black, white, yellow, red. From my point of view, the black one looked classy, but if you prefer more fashionable and eye-catching one, then better go for other color panels.

Coming to the back, the device comes with a removable plastic back cover, which is not that premium, though it provides a good look and grip. There is an 8MP rear camera that is backed up with a powerful LED flash. Moving to the bottom, you can see a Dolby branding in the midst of the speaker grilles. Under the hood, you will find a 2300mAh removable battery, along with a microSD card slot and two microSIM card slots. Overall, so far a budget friendly smartphone, it does well on both design and build quality.

The device sports a 5-inch IPS display that is packed with 294ppi pixel density, giving a resolution of 720 x 1280 pixels. The display used here is a fingerprint magnet, which means you would have to clean it once in a while. To make the device affordable, the manufacturer intentionally sacrificed the Corning Gorilla Glass 3 protection, you can't complain about it. Though if you get a screen protector, it would prevent small scratches to an extent. Thanks to the IPS panel, the display used in this device offers great viewing angles. It offers decent brightness with sharp colors. I found the display a bit reflective under the direct sunlight, but it is acceptable. It has a good touch response, however touch experience is not that smooth, felt a tad sticky.

Lenovo A6000 sports an 8MP rear camera and 2MP Selfie camera on the front. While that may look impressive on paper, but real world experience is not that impressive. The camera sensor used on the back is just average, but it captures enough details and looks good at first glance. However, a closer look will reveal a lot of patchy spots. Surprisingly, the images captured in good lighting conditions came out well. Though in low light conditions, the images looked grainy. It has a lot of issues in focusing on objects as well. The rear camera can shoot 720p video, which actually came out good with decent brightness and contrast. The front camera is decent enough for video chats, but if you using it for taking some nice Selfies, then you would be disappointed. 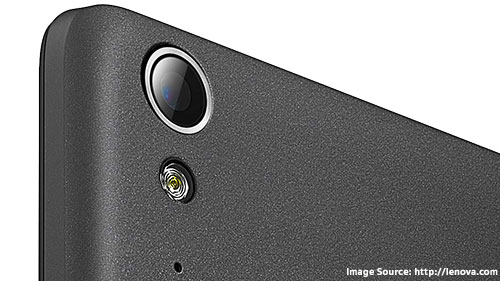 The camera app features a simple camera interface. It may not be packed with features like most flagship models do, but it does come with all basic features a camera app needs, including various shooting modes such as Panorama, Face beauty modes, etc. Most of the basic settings can be found within the reach, however, you will have to dig deeper to find advanced options. The one thing I liked about the camera app is that it allows users to capture shots in the midst of video recording, apart from that I didn't find anything particularly good, considering the camera features.

The handset is running with the Lenovo Vibe 2.0 skin on the top of Android KitKat Operating System. Just like Gionee's Amigo UI, this one also lacks an app drawer, which is the new trend, but if you are moving from a traditional Android smartphone, then you may need few days to getting used to it. If you are not comfortable with it, of course you can always install another suitable launcher from the PlayStore. Lenovo also comes with a lot of pre-installed apps, sadly, most of them are unwelcome additions, while some of them are really useful, including apps like Shareit, File Browser, Syncit, Facebook, Twitter, etc. On the plus side, you can uninstall these third-party apps anytime if you need more internal storage space. One of the interesting you would find about its software is the addition of theme center, which offers a wide range of Wallpapers, screensavers, lock screen images, boot animation, etc to customize your device the way you want.

The device comes loaded with the 1.2GHz Qualcomm Snapdragon 410 quad core processor coupled with Adreno 306 graphics processor and 1GB RAM. It has 8GB internal storage and supports external storage up to 32GB. It also comes with wide range of connectivity options, including Bluetooth 4.0, A-GPS, Wi-Fi, FM Radio, etc. As I mentioned before, the highlight is the addition of 4G LTE Connectivity. Even though the device features two SIM slot, only one SIM slot support 3G or 4G data connectivity. Talking about the performance, the device performs fine without any considerable lag. Although, sometimes you would find some hiccups while switching between apps, it's not a show-stopper. The device offers superior call quality and signal reception as well, which means you won't experience any troubles while making calls in locations where signal strength is relatively weaker. Thanks to Dolby twin speaker, the device performs quite well in the sound department - loud output with decent clarity even at full volume.

To power up the handset, the company managed to squeeze in 2300mAh Li-Ion battery. I know, for a 5-inch Android smartphone, 2300mAh is not a spectacular figure, though it does offer enough battery juice to keep the device ON for a whole day. Of course, its mileage may vary, based on your usage.

With A6000, priced at Rs.6,999, Lenovo started a new trend by rolling out 4G enabled entry level smartphone. At this price, it offers a great value for a budget friendly device. The company did sacrifice some goodies you would find in high-end devices, including features like Corning Gorilla Glass protection, advanced camera features, etc. On the plus side, the device comes with good okay performance and decent specs, delivers smooth and lag-free performance. But, the camera performance is a tad disappointing. In my opinion, if you don't care about 4G Connectivity, better go for other options in this price segment.