Apple and Samsung have been fighting with one another for over a couple of years or so. Technically speaking there is head-on competition between the two handset makers. It's more than enough reason for the Apple to be eyeing on Galaxy S4. 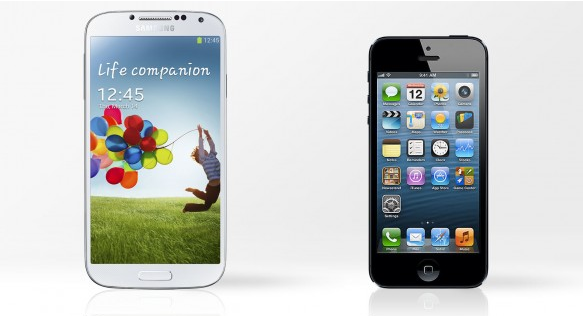 Samsung hasn't tried anything new as far as the build quality is concerned. The back of Galaxy S4 feels plastic. At least they could have tried a new Aluminium body in the S4 (that's what I personally feel).
On the other hand, iPhone 5 has Aluminium body at its back. The very first look makes it a premium phone.

The looks in Galaxy S4 haven't changed much. It has the same curves in the corners as we have seen in its predecessor, Galaxy S3. Galaxy S4 is surrounded by polished metal around the perimeter of the screen. When exposed to light it makes it shine like a Diamond as in the case of iPhone 5.

Samsung Galaxy S4 comes in two variant:
• Exynos octa core 1.6GHz
• Qualcomm quad core 1.9 GHz
So, now Samsung is allowing it's consumers to choose from either Quad core or Octa core processors.
Apple iPhone 5 comes with Apple A6 dual core clocked at 1.3 GHz.
But, will more numbers of cores still be able to bit Apple's dual core, it's just a months away to watch out for.
Samsung Galaxy S4 houses 2 GB of RAM which is double the iPhone's 5 RAM.

Samsung Galaxy S4 comes with a huge 13 MP rear camera and a 2MP front camera. It has put some nice features into the camera like dual shot mode (which we saw in LG Optimus G Pro also) and records a video clip with still photographs(as on HTC One: called Zoe).
Apple iPhone on the other hand comes with 8MP rear and a 1.2 MP front camera. It's possible that Apple may increase its Megapixels and join the 13 MP clubs with its next iPhone version.

Galaxy S4 houses a huge 2100mAh battery. No official words on battery usage have been made. On the other hand, iPhone5 houses a 1440mAh battery which is estimated to be giving 8 hours of talk time.

A page can be moved up and down just by a wave of hand. It also comes with IR blaster so that it can act like your TV remote controller. Samsung hub has been renovated to make it look more like play store. It stores your movies, music and videos.

The release of Galaxy S4 is expected to be around Q2 of this year.

To sum it up, Galaxy S4 beats iPhone 5 in all respects except a few. Will Galaxy S4 become a potential threat to iPhone 5's reputation or not? We will get the answer as soon as we get Galaxy S4 in the markets.
For more updates, stay tuned with us.