Samsung, after the huge success with the Samsung Galaxy S3 smartphones, is buoyed and has released Samsung Galaxy S4 in the New York markets on 14th March, 2013. It is expected to be available in India by April end.

Going by its reputation of providing the top class displays in its smartphones, Samsung this time to has gone ahead to make more improvements in the display screen of S4 has has brought a sharper and larger screen in Samsung Galaxy S4 as compared to Samsung Galaxy S3. The screen size is 5 inches but the body is slightly smaller than S3. 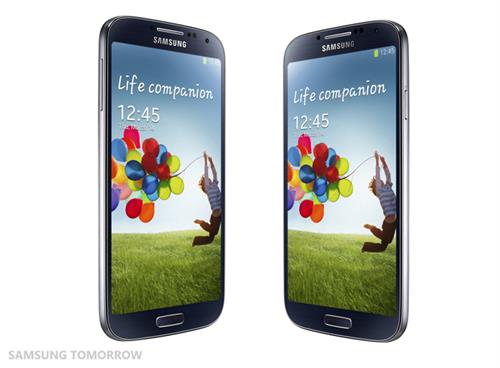 In US it is being sold by Verizon Wireless, AT&T, Sprint Nextel and T-Mobile USA -- as well as by smaller carriers- US Cellular and Cricket.

The prices are not still clear but it will cost around $200 in US inclusive of a 2 year contract.
Samsung Galaxy S series has emerged as a direct competition to the iPhone's and in the middle and low end budget category it has taken on Nokia to get the shares of all budget categories. Since the Galaxy S series has came out it has sold around 100 million sets, a record in itself and has presented a very tough competition to all the players in the market including LG and HTC.

The main weapon in Android powered Galaxy S series has been its increasing screen size. Its biggest competition iPhone 5 has a 4 inch screen whereas S3 has a 4.8 inches screen and now S4 has a 5 inches screen.

Samsung has brought a more powerful battery to power this advance smartphone but that might not translate into larger battery life too because of the increased screen size.

Special features
Some other special features of Galaxy S4 are a IF red diode which is used as a remote control in television sets, this is not a new feature in Android smartphones but is one of the lesser found features. Other than this, Galaxy S4 can detect a finger even before it touches the screen. If you hover a finger above the screen, some of the applications of the smartphones react. For example a gallery image will show an expanded view of the image when a finger is hovered above it, similarly you can preview the first few lines of a mail when you hover your finger above any individual mail. One can scroll the screen just by hovering the finger above the screen, so no need to get the screen dirty while eating and reading on your S4.

The cameras (rear and front) of Galaxy S4 can work simultaneously allowing you to insert a picture of yourself from the front camera in the image from the rear camera.

Keep two Galaxy S4's in close proximity and you have a synced audio player, that is, both the smartphones will play the same music therefore amplifying the sound in a room and making both the sides get equal audio volume.

You can opt for updates at the Samsung official website for Galaxy S4 so that when it is available you can order it directly.
You can add it to your wishlist for now and when the smartphone is available you will be able to order is in the first few days of its availability by getting an email alert.
http://deals.jeetle.in/samsung-galaxy-s4.html
The price of the smartphone at the above site is Rs.43,990.

We will keep on updating this list as soon as we have more details from where you can buy Galaxy S4 smartphone. Meanwhile, you might like to read about the pros and cons of Samsung Galaxy S4.