If you are an Android user and are getting bored of playing same games all the time so there is great news, rather I will say a great game for the Android users and game lovers- King Fighter 3. The game comes under the category of Arcade and action which requires Android 2.1 or above update to play this cool and fast game in your Android smart phone. Anyone who starts playing games they want their game to be best in all respect in field of graphics, sound and the most important point is the hidden challenges that everyone look for. So this game is full of these actions and adventures.

Once you start playing King Fighter 3 game the hunger for game will not decrease that is the promise of the developer and at last you have to show who is the real king of the this game.

1. Download King Fighter 3 and install it on your Android device.
2. When you start the game you can see the NEW GAME option touch this option to start the game.
3. After that you have to select archive from the given option, your fighter and stage to start the game.
4. You can see the direction buttons on the screen and a boxing punch sign to attack your enemy and you can double touch your D-pad to rush and then tap to attack during the rush time.
5. You have to kill your enemies by the punch and your rush attack and when you hit them you will be getting powers and first aid to back up your power and you can check there power on the screen itself.
6. As the game progresses you have to be more and faster to kill your enemies and with the level increase and killing your enemy you will get new powers which are visible on your screen. 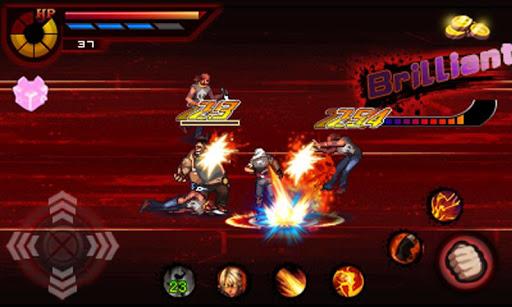 1. Cool graphics with different players to unlock and to choose.
2. The controls are easy but as the level increases craziness of the game starts attracting the user which proves to be a addictive feature of this game.
3. Fast coming enemy and increasing number of enemy will not let you to move your eyes from the screen.
4. At the end of a level it shows you your time and overall grade which can reach to a better state by playing more and more.
5. It has a word to define your speed and your experience level which means the user don't want to be behind from anyone.

1. Run away when you are surrounded by the enemies.
2. If you have been knocked by a enemy you can jump up and fight back by pressing downward before landing to the ground.

King Fighter 3 game has been rated with four stars which is a deserved rating for this game. Some users are not happy with ads coming in between the game but if you have patience than you are not very far from an outstanding which is full of harder levels and the medical pack which insure you to survive in the game. As the game goes on your speed and your presence of mind will lead you to the success with grand new experience of a new level. Playing King Fighter 3 make you feel like playing in real with its speedy motion of enemies.

A good game but with lots of ads coming in between the game makes user to avoid the game which can be removed by mailing your IMEI number to the email given by the developer after that it is just awesome. The directions buttons are located quite close to each other which is going to break your speed.

No doubt the game is addictive only with the speed and reflex actions and it is fun to play King Fighter 3. But if someone with the larger display of phone can use this game better as the directions button are no longer close to each other. You can download the game and enjoy it . I do not say that it is a must game but one should play this game to know its addiction. And please share your experience with us and the other users who are going to download it.

Will Darksiders 3 and Metro franchise ever see the light of the day?

Draksiders was one of the best hack n slash RPG of 2012 as well as Metro: The Last Light, a great post-apocalyptic shooter. Sadly though, both franchises' future looks uncertain as THQ has gone Bankrupt. Will they ever see the light of the day? Let's find out.