Detailed review of the game Carota!

Carota! is the new downloadable paid game from iTunes. Its official description describes it as an "SNES-styled puzzle game" made on the lines of Pipe Dream. However, in Carota! you are not building pipes to contain the slow but steady ooze, instead you are arranging tiles so that Thaddeus the Cabbit is able to find his way back from a hole into which he fell after being knocked down. The story is just like Wonderland except for the fact that it looks like he is trying to get out from the wrong side of the Wonderland. To help him reach out you need to maneuver the tiles to make a path for him.

That's the simple explanation of the game but the game is actually much more complex. There are many factors to consider to this puzzle game of Carota! For instance, there is some minimum number of tiles that Thaddeus must cross before he can reach the exit. Also, only some particular colored tiles count. He rarely deviates from his straight path and you will find that you need to turn and even move the tiles to make way for him. 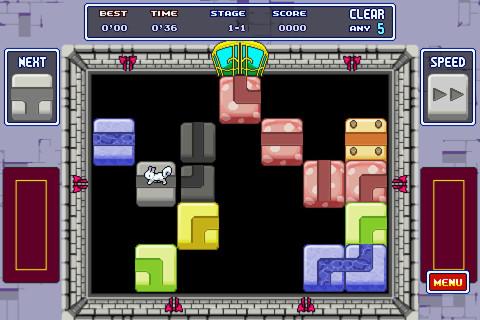 And yeah, the tiles are not simple unmovable tiles. The tiles sink when Thaddeus steps on them and he cannot go back onto that tile on which has already stepped. To further complicate the situation there are tiles with special attributes. For example, there are the watery blue tiles that make you slip so fast that you need to decide the direction you need to take as soon as the stage begins. Then there are the mushroom tiles which can end your game immediately by throwing you in the pit in no time.

There are too many elements to control in getting Thaddeus from one point to another. The famous touchscreen of iPad is good but still, it just somehow manages the task. On more than one occasion I found the touch to be non-responsive like when flipping a tile or moving a tile or even for the menu button. Yet, going fast is important but then when you drag the tiles in speed the game seems to be incapable of keeping up. Aggravating the problem is that you cannot slide a tile over a sunken tile. In short, to play Carota! successfully you need to be fast and precise.

Not only the controls are difficult to manage, the game itself is a little bit confusing. For example, during the starting of the game I faced a lot of frustration as no matter how many times the drawbridge marking the entry of the next level would open, I could not get Thaddeus across it. Then only after spending some time cooling my head off and by luck did I learn that getting him to the next level requires an extra step, so therefore another tile movement was required.

Now, something which I found strange in the game was the timing of the tips that were given. In the start levels, the tips came after I had crossed that part of the game and had figured out those tips myself. This improved as the game progressed and I found the tips useful, but why they would hold back the tips until we had passed that level is only someone's guess.

My last issue with the game is that not so difficult levels seem to be stretched out too long. The number of panels required to clear the level seems to be too high and you would feel that you are moving in circles until extra tiles would arrive and go and then only you can proceed to the next level. However, by then you get bored by the game.

At the conclusion I would only say that Carota! is a low to medium rating game. With high difficulty and problem with controls this is not a game that I feel playing again unless I have no other option.

Good puzzle game for iOS and nicely explained in the detailed information of Carota game in this article. Is the same gave available for Android Devices. What is latest version of this game?