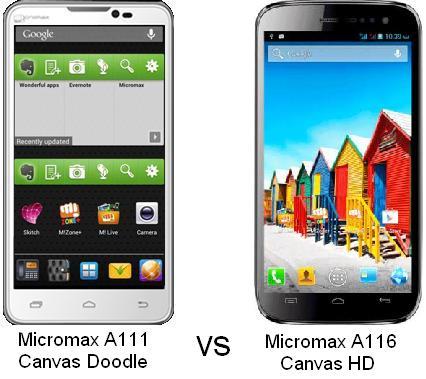 Micromax is one of the premier smartphone manufacturing companies in India. It holds 12th rank in the world in the manufacturing and shipping of mobile handsets. The quality and affordability is the most important strategy of the company in selling its mobile phones. The Canvas series of the affordable quality mobile phones manufactured by Micromax has given the company a lot of popularity. So much so that the name Canvas has almost become synonymous with the name of the company. The company has been continually bringing into the market some or the other Canvas smartphone in the market. The company's flagship smartphone Micromax A116 Canvas HD created ripples in the phone market as soon as it was released on Valentine's Day in February 2013. The company made arrangements with the online shopper Snapdeal to sell this phone online. Such was the demand for the phone that about 9000 handsets of this phone were sold out within 24 hours and the phone went out of stock temporarily. Now the company has started manufacturing the Canvas series directing the sales to the particular needs of some of the users. With this, the company has brought out Micromax A88 Canvas Music to satisfy the needs of music lovers. Taking a clue from Samsung Galaxy Note, Micromax has launched its own budget phone Micromax A111 Canvas Doodle with stylus for the art lovers with an in-built EVERNOTE app for doodling. Let us make a comparative study of the features of Micromax A111 Canvas Doodle and Micromax A116 Canvas HD. You may also quickly glance through the comparative specifications of the two smartphones from the accompanying tabular information.

Micromax A111 Canvas Doodle has been announced and released in the market in May 2013 at a price of Rs. 12,999/-. On the other hand, Micromax A116 Canvas HD was announced in January 2013. This smartphone was released on Valentine's Day in February 2013 at a price of Rs. 14,499/-. About 9000 units of this phone were sold at Snapdeal on the day of its release, and it went out of stock temporarily.

Both the smartphones have the same sound features like Vibration and MP3 ringtones, a loudspeaker and a 3.5 mm jack. However A116 has additional WAV ringtone facilities. The memory of both the smartphones is the same 4 GB. But the user available memory out of 4 GB is less in A111 (1.22 GB) compared to user available memory of 1.77 GB in Micromax A116. The external memory in both the phones is expandable up to 32 GB via microSD card. The RAM in Micromax A111 Canvas Doodle is only 512 MB. On the other hand, Micromax A116 Canvas HD sports RAM of 1 GB, which is double than that of the former.


The messaging in both the smartphones is through SMS (threaded view), MMS, Email, Push Email and IM. Similarly, both the phones supports HTML5 browser. For entertainment, both Micromax A111 and A116 are equipped with an FM radio. Both have the A-GPS support and Java support via MIDP emulator. Micromax A111 Canvas Doodle comes only in white colour. But, Micromax A116 is available in both the white and the black colours.

Other features and battery

In my opinion, unless you are of an artistic bent of mind and are not worried about a price difference of about Rs.1500, Micromax A116 Canvas HD beats Micromax A111 Canvas Doodle in all departments. The battery is little more powerful in A111 and same is the case with the display size which is about 0.3 inches larger than A116. But that should not make much of a difference when we consider the superior 1 GB RAM and superb display resolution and pixel density of Micromax A116 Canvas HD.