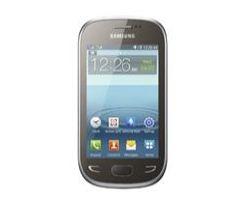 For connectivity the phone makers offer GPRS, Wi-Fi, Bluetooth (v3.0) and a micro USB (v2.0). The Deluxe Duos S5292 is capable of playing audio and videos under various formats which includes MP3, Mp4, and WAV etc.

The 1000mAh Li-Ion standard battery will bring positive results for the smooth run of the handset. Currently the Samsung Star Deluxe features only in black colour. This Dual SIM (Mini-SIM) phone is expected to get released in December 2012. The product which is currently known by the product code GT-S5292 is tagged under the project name 'Pollux'.

As only the preliminary specifications and features of Samsung Star Deluxe Duos S5292 are out, it would be too early to say the price and availability of the phone. But with the given specifications and features, it is much sure that the Samsung Star Deluxe Duos S5292 would be choice for those who are looking for a low cost device which could cater support to bring their tech dreams alive.