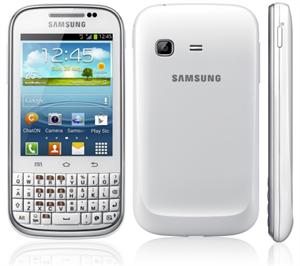 Very Recently Samsung had announced the launch of its very new Android smartphone 'Galaxy Chat GT-B5330'. This is one of the kind of Samsung mobile which comes with Android 4.0 Ice cream Sandwich Operating System.

Earlier, QWERTY layout used to be the trend among the users which was made obsolete by the Android revolution and now comes a combination of both. A paradigm of which we have already seen in the HTC Chacha which has Android 2.3 Gingerbread and 2.6 inches touchscreen display. 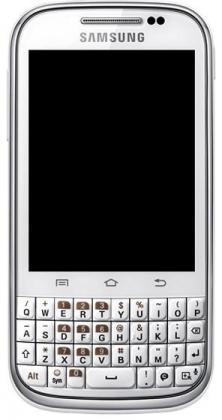 Samsung Galaxy Chat has a very sleek and compact design, such that on the first look itself will give some attraction. It comes with a 3 inch touchscreen QVGA display. It includes three physical buttons like any other Galaxy devices, mainly the Menu button, Home button and a back button which are located inbetween the display screen and the QWERTY keypad. Group chatting can be done with the Samsung Chat On social services. Data usage can be easily tracked and monitored every month.

The phone has a 2 megapixel camera on the rear end and Bluetooth 3.0,the latest technology of wireless file transfer. It has Wifi internet access along with 3G. It includes 1200 mAh battery and an internal memory of 4 GB along with micro SD card slot for further expansion of storage. Samsung did not revealed other hardware specification of this device yet. But it will be revealed soon before it hits the market. 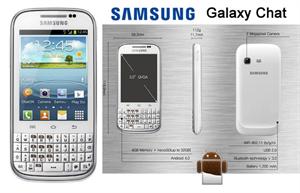 Applications and Services Of Galaxy Chat

Many services are being preinstalled in Galaxy chat, some of them are Games Hub, Social Hub and Music Hub. The AllShare Play enables users to play multimedia with any other connected devices. Microsoft Word, Excel, Powerpoint, Google Docs, Google Spreadsheets and Google Presentations can all be viewed and edited in the Quickoffice application. Galaxy chat also features an interesting application known as 'S Planner app' which allows its users to manage their schedules in an easy and organized way.

Samsung Galaxy Chat was officially announced on 4 July 2012. Spain will be the first country to enjoy its launch in July end followed by other European countries. The launch in native America,Middle East countries, India, China, South East Asia and South west Asia will follow thereafter. While talking about the release in our country, it is being expected to be released in India in Q3 2012.

Although there is no news about the price of Galaxy Chat, it is being expected to hit the market with a price tag around Rs 10000.