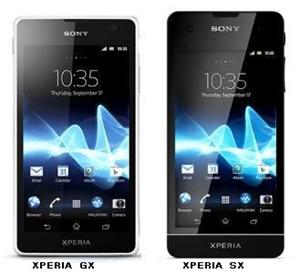 These two smartphones, Sony Xperia GX and Sony Xperia SX were announced at Japan, on May 9th by the Sony Mobile Communications. The new Xperia GX and SX joints the popular Xperia NX and Xperia acro HD, which are the best selling phones, currently in Japan. And due to this ,company designed this Android based smartphone espesially for Japanese Market.

The company says the devices are provided with ultra fast perfomance and powerfull network speeds.Both devices enables multiple connectivity screens and easy connectivity features to share and enjoy any content on the phone to whatever the screen is, like laptop, TV, tablet etc. And the company says Sony Xperia SX is the world's lightest LTE smartphone, which weighs less than 100grams. In this article we are discussing about the cool features and specifications of the new Sony Xperia GX.

The new Sony Xperia GX comes with a Dual-core processor, which is clocked to 1.5 GHz Krait, and is powered by the latest Qualcomm MSM8960 Snapdragon S4 chipset. Although the device has got the maximum in the case of processor ans the chips, the company is making the new Xperia GX more adorable by providing Adreno 225, Which is one of the best GPUs out there. And user can assure the best gaming and visual experience with the Adreno 225 and the latest display technology of Sony. And the most featured thing is that, the Sony Xperia GX comes with the pre-loaded Android v4.0.3, Ice Cream Sandwich, which makes it a fully functional Android machine. The device has got about 1 GB of RAM, which makes this high-end Android based smartphone lightning fast. The Sony Xperia GX has 16 GB of internal memory which is more than enough for a smartphone, and it is the perfect solution for them, who finds problem of lack of storage in Smartphones. 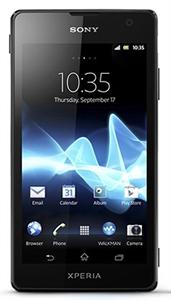 The main feature about the Sony devices is its display. And as the device is the latest, they have introduced the latest technology to make the display 'eye-poping'. And now, they comes with the Reality Display, which is powered by the excellent Mobile Bravia Engine and it makes the display crystal clear and full HD screen actually doubles the effect. The screen is of LED-backlit LCD type. And enhanced by providing 16M colours and 319 ppi pixel density. The device has got a large display screen which is of 4.6 inches which makes the display more realistic with all these features. The resolution of the screen is 720x1280 pixels, which is too good. The Xperia GX comes with capacitive touchcsreen, supporting multi-touch, up to 10 fingers, which is totally cool. The device is provided with user friendly and elegand user interface which is the Timescape UI, comes with the Android 4.0 ICS. The display panel is secured by special Scratch-resistant Galss, and provides maximum protection. 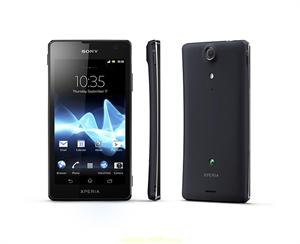 The Sony has manged to include all the features in it, and also made the device ultra thin and light weight. It has got dimensions 131x69x8.6mm. On the first look itself, the smart designing of the device can be understood. First thing is the shape. Like the Xperia Arc, Sony has given a slight 'arc' shape for the device for that ultimate in-hand feeling, and they have succeeded in producing that comfort in hand. The Sony Xperia GX has a matte texture on the back slim design, that makes it fit for every hand and pocket. On examining the device, we cannot find any physical keys on the front of the phone, and the navigation is fully made possible by touch sensitivity. Just below the display, we can see three touch sensitive buttons, which are, a bach key, a home key, and a key for swithching between softwares works as task manager. And also they have provided only 3 physical buttons on the device. On the left of the phone, we can see a power button. A dedicated camera key on the right bottom and a volume rocker on the right top edge and above it there is a microUSB port. The smart and simple design is the appreciable thing, which is going to be an important factor on the success of the device. The primary camera is placed on the rear close to the upper edge, with the LED flash just below it. The secondary camera is placed on top right corner of the front of the device.It comes in two colours as black and white.

The Sony Xperia GX comes with the greatest camera that Sony ever used. They are introducing a camera of 13 megapixels on Xperia GX for the first time. Also with the highest camera they are providind highest detailing on the camera. They have provided the new Sony Exmor R Technology for the mobile, which enables the user to capture pictures and videos in full HD. The camera is enhanced with auto-focus and also provided a single LED flash. The other features of the camera are Geo-tagging, touch focus, face and smile detection. It also comes with Sony's technology to capture 3-D Panoramic sweep. It is also facilitated with image stabilization. It also enables to capture video at 1080p @ 30 fps which is full HD. It is also enhanced with continious auto focus, video light and video stbilizer. It also supports dual shooters. The shooter at the front is of 1.3 megapixels and can capture videos at 720p @ 30fps, which is rare in smartphones. The company has made the camera upto the standards of the remaining specs.

Connectivity and Other Features of Sony Xperia GX

With all these high-end features, they have not shown any shortage in case of the connectivity options. The main thing is that it comes with LTE 2100MHz connectivity. It makes the device ultra fast that it enables to download at rate of 75Mbps. It also has 3G connectivity, which is vital in all smartphones. It also has bluetooth and Wi-Fi. The Bluetooth adopted here is v3.1 which is pretty fast in remote data transfer. The device supports Wi-Fi hotspot and DLNA. Other options for connectivity are a microUSB port which is USB 2.0. It also has a 3.5mm jack. The data sharing is made possible through DLNA and HDMI. The device is enabled with easy connectivity with multiple screens to share and enjoy the content to whichever it suits like laptops or tablets or TVs. 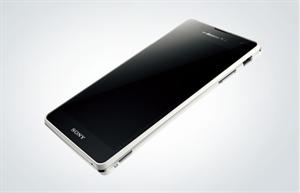 Other thing is that they are bringing the best of their technology for maximum entertainment. In Sony Xperia GX, they introduces 3 new media applications. First one is the 'Walkman' application, and through this they integrates high quality audio technologies such as clear sterio, clear bass,VPT surround sound and xLOUD all together, which gives a totally different way of enjoying the media and it enables to play, discover and recommend music. The next one is the 'Album' application. It help to sort out and browse photos and videos and also provides instant viewing. And the last oneis the 'Movie' app. It enables to play and video stream high quality videos with intelligent database which hlep to know more about the video or movie, which gives an immersive experience. It has a great battery of 1700maH which will be equivalent to twice or thrice the normal batteries. So the device will not be easily juiced out.

We have seen the most exciting features of the new Sony Xperia GX. And they have provided high-end features on it and hence the price will also be high. I am sure that this gadget will not be for the middle class ones that it cost much higher that the expectations of the average. We think that the Sony Xperia GX is going to hit the market witha price tag about $625-$675, which is almost Rs.33,000-Rs.38000 INR. And the Sony Xperia SX will cost about $550, which is about Rs.28,000 INR. The device is expected to hit the markets in 2012 itself.

Overall, the new Sony Xperia GX is a great device with alot of cool features that a normal smartphone lacks. The high end camera, dual-core processor, enough RAM and storage, pretty big display, smart design makes the Xperia GX the new Future of Smartphones and this high-end Android machine will be a tough competitor out there with the mighty ones.