What is Android One?

Android One is a platform by Google which lists down certain pre-set specifications of hardware to various smartphone manufacturers to base their smartphones on. Google, on the other hand will provide the latest Android software and updates to these devices as soon as they are available. These devices are primarily focused on first time Android users and priced aggressively by its manufacturers. The Android One concept has so far been adopted by three manufacturers in India: Karbonn, Micromax and Spice.

In this article, I will be reviewing the Android One device manufactured by Karbonn, the Sparkle V. 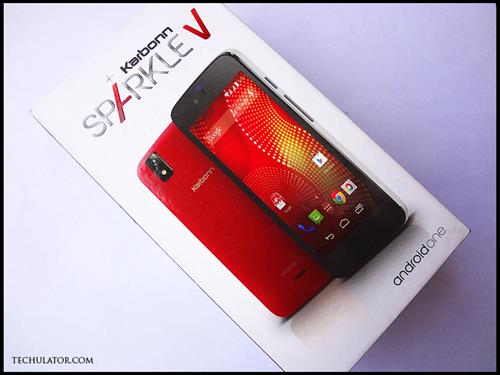 The Karbonn Sparkle V is a dual SIM smartphone that runs on the latest android version (currently Kitkat 4.4.4). It is equipped with a 1.3GHz Quad core processor, 1GB of RAM and 4GB of internal storage which can be expanded up to 32GB with the help of an external micro-SD card.

It has a 4.5 inch IPS LCD display with a pixel per inch density of 218ppi. This capacitive touchscreen has 3 onscreen buttons and no hard buttons in the front. The rear camera is a 5 megapixel auto focus camera capable of recording HD video at 1080p. An LED flash is located right below the camera. The secondary front facing camera is 2 megapixel and can record HD video at 720p. 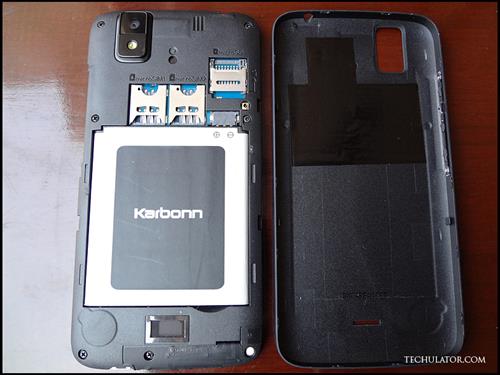 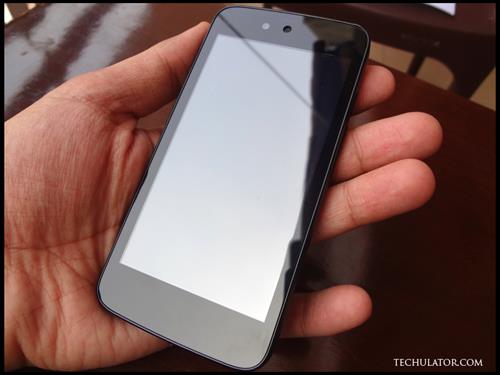 The battery on this device is user-removable and has a capacity of 1700mAh. The important factor to note is that this battery is a Lithium-polymer battery and not the usual Lithium-ion battery found in most smartphones these days. Upfront you would find an ambient light and proximity sensor next to the phone speaker. Internally, G-sensor, Gyro and Magnetic sensors are also available in the device which will help you while playing games and using other apps on this smartphone.

As an Android One device, this smartphone will always be running the latest version of Android available in the market. At the time of writing this article, Android KitKat 4.4.4 is the latest version available and running on this device. Android Lollipop 5.0 is expected to be released soon and we expect an OTA update for the Sparkle V coming soon.

The Android version running on this device is pure vanilla and does not come with any manufacturer skin over it. I love using Android in its pure form just like the Nexus devices and this one's no different. Apart from the usual Google apps like Gmail, YouTube, Chrome etc, apps like OLX, Saavn and Snapdeal also come pre-installed. An FM radio is also part of the Sparkle V and works like a charm. The default camera on this device is Google Camera which is also available on the Google Play Store.

Quickoffice app comes pre-installed as a part of the bundled software so you won't have to worry about buying/downloading a decent word processing app for everyday needs.

The overall speed and functionality of the device is great and perfect for regular use. I have personally used the Nexus 5, Moto G and LG G3 and the speed with which this device lets you multi-task is at par with these high-end devices.

The hardware buttons on the device like the Power On/Off and Volume Up/Down buttons feel tactile and good quality. The device feels slim to hold and the plastic used on the back panel feels sturdy. The speaker on the back is pretty loud and there is absolutely no chance of you missing out on a call while is a noisy environment. 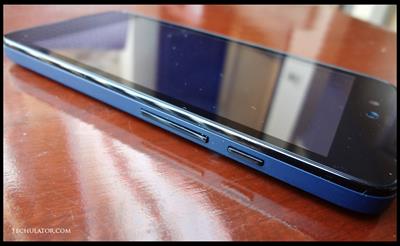 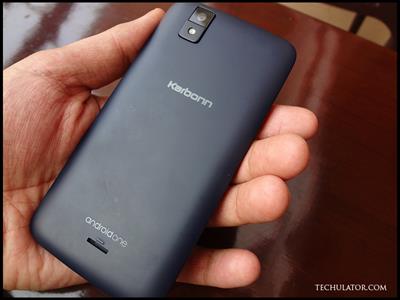 Contents of the Box 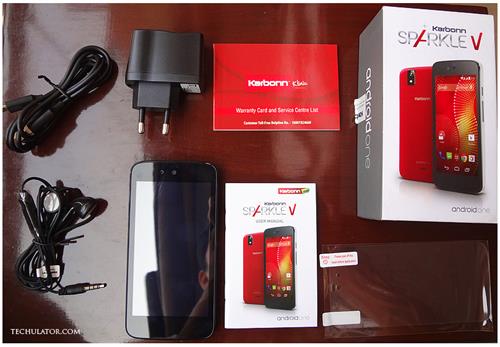 Other things to note:

Being a dual-SIM, we expected the 1700mAh battery to perform averagely on a medium-high usage. However, the lithium-polymer battery lasted for more than a day (around 30 hours) with 3G/2G always on.

The Karbonn Sparkle V is currently priced aggressively and available on most e-commerce websites in India. Currently it is priced somewhere around INR 5999-6200 and is available in Blue, Red and White colours.

The Android One initiative by Google

Google at its annual I/O conference announced the release of the all new Android One program. Aimed at enabling manufacturers to produce ultra cheap smartphones with great ease. Read this article and know everything you want to know about the Android One smartphone program.

I have downloaded many file managers. But, None of these apps can copy or do anything in my phones system memory.