Solar cells are used to convert sun light into electrical energy. LED is capable of doing the same.

An LED is a semiconductor optoelectronic device which emits a narrow bandwidth of visible or invisible radiations (light). LEDs operate on electroluminescence (emission of light from a semiconductor under the influence of an electric field).

Internal Structure of a typical LED 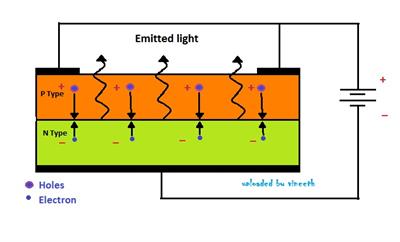 In the figure shown below, anode is given a more positive potential than the cathode. This makes P region more positive than the n region. This positive potential at P region repels holes to the n side and the negative potential at the n side repels electrons to the P side. So, holes and electrons recombine at the PN junction and this produces energy. In case of an LED, this energy will be released in form of photons. These photons escape through the window provided on the anode and hence, the LED acts as a light source.

Colours & constructions
Depending on the type of material used to make the PN junction, the wavelength of light produced varies. Different colours are produced for different materials used in the construction.

How LED works as a solar cell? 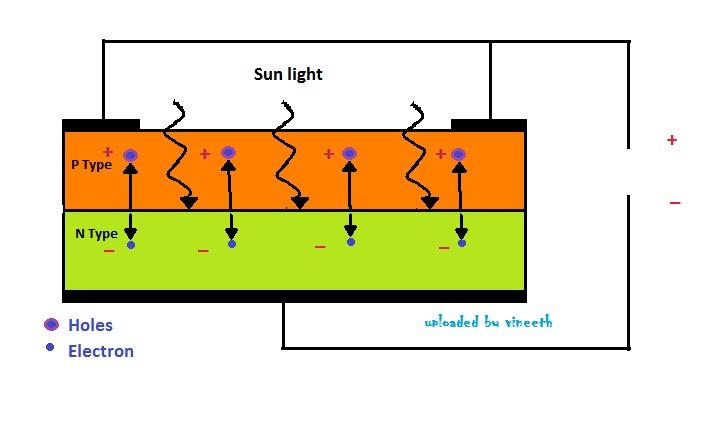 When solar light is allowed to fall through the window of an LED, the photons in the light which has wavelength equal to the band gap of LED penetrates deep into the PN junction. On absorbing energy from these photons, the electron hole bond at the PN junction breaks and result in accumulation of electrons in the n side and holes in the p side. So, p side will be more positive than n side. This makes anode positive and cathode negative. Hence, LED acts as a cell. 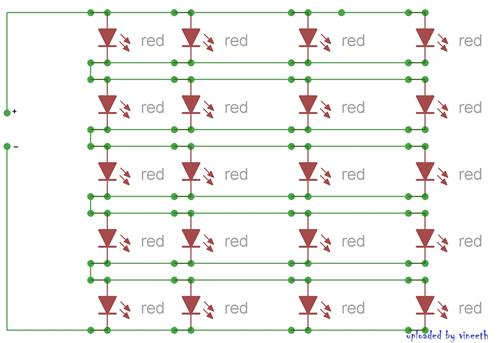 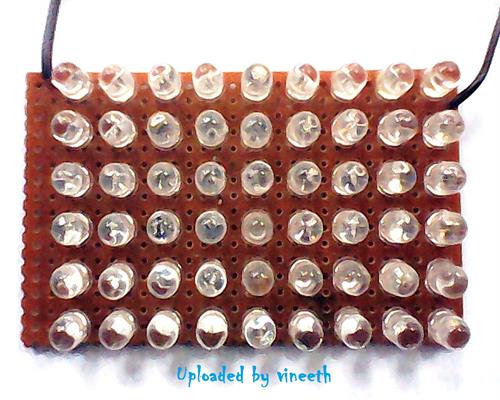 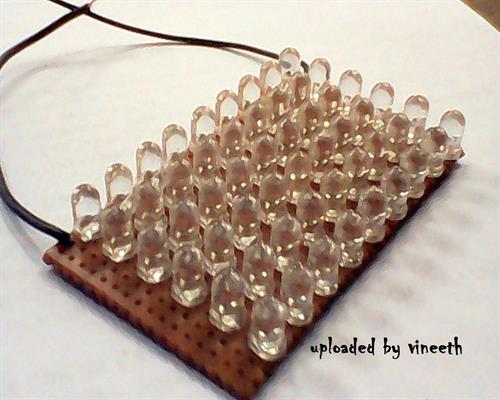 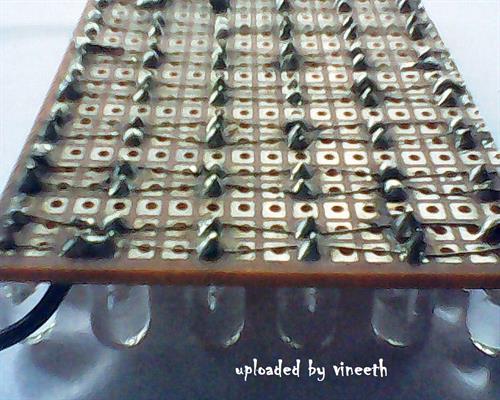 If the number of LEDs in this circuit is increased, more volts and higher current rating can be obtained.

1. The cost incurred is low. They are economical in use.
2. They are easily available.

1. If it is exposed to sunlight for long period, the LED can damage. In order to prevent this, high power LEDs can be used.
2. All the LEDs should face the sun at the same angle. This can be done by mounting all the LEDs on a common PCB.
3. Since the output current is low, for high power applications, more number of LEDs must be used but this makes the circuit bulky.

Hi Vineeth,
If using yellow led, does it have different output voltage? I am very interested about led as solar cell. I want to exchange opinions with you, can I know your email?

Well, I would like to construct one, for my self,and then confirm, OK,But however, I must congratulate the auther for, his brain wave.Thanks.

How many LED are required to make a mobile charger. Please send me the circuit diagram with 5vd c1000mA. I need it for my mobile.

How many LED's should I put such that it will generate 12V?

This just doesn't work. At least not at the voltage level described. I just tried about 4 different kinds of LEDs. All were about the same results. With a single LED reading V on my multimeter with my iphone light touching the LED I get about 1.3-1.6 Vs. With 2 in series I get about 3V after that things go down hill fast. Adding LEDs in series from that point forward decreases voltage instead of increasing.

Next I tried to measure current. I couldn't read any current on a very nice Fluke DMM. I tried using another LED as a load or a little mini filament light bulb that I use on my breadboard. No current registered.

So I said what the hell I will solder up a board like in the article. I made 8 rows series each with 7 LEDs in parallel. The most Voltage I could get was .6 Volts and still couldn't read any current draw when I attached a load.

I thought maybe the current output was super small so I tried tripping the gate of a very sensitive SCR. No luck.

I think the problem is that the LEDs are a super weak power source but an easier load. How does this circuit keep from just draining its self trying to power the LEDs? It is like a free energy machine it just doesn't work even with external energy (light) applied.

The theory is good, one I've been working on but cannot solve. I'm guessing each LED needs it's own circuit so that it's not losing power trying to energize it's neighbor. Does anyone have a solution for that?

The rule which regulate the use of LED's are in play. The reason you cannot get much energy out is a simple one.

The LED that is consuming the power is using up all the energy produced. Perhaps the solution would be to use something like a diode bridge to separate each LED so they can produce power individually and tie them all together at the end. You would need to have diodes at the end of each circuit to keep the inverse voltage from feeding back through.

This is not a very good set up and the cost would be high. Solar panels would be cheaper than this setup.

But I give you props for experimentation.

You would need an acre of these to power a house. LOL :)

@ Eddy and Sherry: I think the solution to both of your problems is, as the author said, that the LEDs need to be at the same angle. This means that they are at the same angle from the light source. With the sun as a light source, being mounted flat is as close as you will get to be at the same angle, however, if using the light on your phone, mounting flat will not be sufficient to get the angle the same. In fact, the closer the light source, the worse the angle difference will be. When LEDs are receiving light from different angles, they will be producing different amounts of power. When connected to other LEDs, their power may be used up by another LED that is underpowered.

I tried this before I read this article then searched for the topic. The Red LEDs I used produced slightly less voltage than the Green and Yellow ones. Smalled ones produced more than the larger 5mm ones. I have not tried the IR ones I have but may do that next. I tried 4 in series and 8 in series. I was able to achieve 12VDC at an unknown amperage. I was also able to produce two 6VDC series wired parallel on a breadboard, again at an unknown amperage. I am not, by any means, a professional and was able to figure this out quickly. Notes:
- Sunlight is really the best option for a light source. Nothing else seems to produce these results.
- If this can be done consistently with a higher-powered LED, sufficient amperage can be produced.

In a mad max world situation could a large enough led solar panel be mounted to a car with a electric motor and solid state battery to survive the wasteland vs Petrol vehicle? Electric cars would be the best solution in such a world so kinda hoping it could work lol

Use a regular diode to prevent v/curnt loss ,then to mini caps for allocation then to storage bank.

Where are you getting LEDs cheap enough to make this cost-favorable compared to just buying a solar cell?