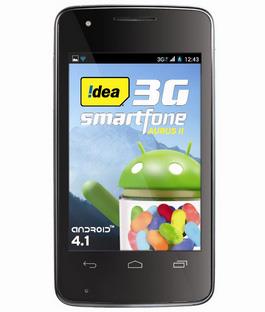 Aurus 2 is the latest Idea Android 3G Smartphone launched in Idea club. Idea India is launching a wide variety of Smartphones in India with free 3G data plan to promote their 3G services in the country and to attract their existing 2G users to its 3G services. Idea offers this low budget 3G Smartphone that runs on Android Jelly Bean operating system with free 3G data plan and free Idea TV subscription for 3 months. It is a good deal from Idea India for their customers to get a dual sim Android smartphone with 3G internet plan for just Rs 6,490. This offer is available for both Idea prepaid and postpaid users. This 3G plan is only available in Andra Pradesh, Gujarat, Himachal Pradesh, Haryana, Jammu and Kashmir, Kerala, Maharashtra, Madhya Pradesh, Uttar Pradesh (W) & Uttar Pradesh (E) circles while 2G data benefits are available in other circles

Idea Aurus 2 is a stylishly crafted Smartphone powered by 1 GHz processor and 512 MB RAM. It comes up with a smoother and faster response 3.5 inch touch screen with a good visual clarity HVGA display. This capacitive touch 320 x 480 pixel display has 262 k colours. It runs on Android Jelly Bean Operating System and features Gravity sensor, Light sensor and proximity sensor. You can enjoy faster internet browsing, email updates, games and smart applications & widgets, with 4GB internal memory and 1400 mAH powerful standard battery that gives a talk time of 7 hours in 2G and 6 hours in 3G. It has an internal RAM of 512 MB and an external microSD memory card slot that can be expanded up to 32 GB which enables the user to store more and more videos, music and datas. The primary camera is only 3.2 mega pixel and does not feature an auto focus, but is provided with a front VGA camera to make video chatting and can make the benefit of 3G connection. For Data transfer, it features GPRS, EDGE, USB (v2.0 microUSB), WLAN, Bluetooth (v4.0 with A2DP) and 3G (HSDPA 7.2 Mbps; HSUPA 5.76 Mbps). It also features practically unlimited phone book entries and unlimited call records.

Idea is offering free 3G data usage and Idea TV subscription for three months along with Aurus 2 Smartphone. This Android 3G Smartphone is available at a price of Rs 6,490 while other Android Smartphones are priced above Rs 10,000 in the market. The free 3G data offer is only available in AP, Gujarat, HP, Haryana, J&K, Kerala, Maharashtra, MP, UP (W) & UP (E) circles while 2G data benefits are available in other circles. This offer is valid for both prepaid and postpaid customers. The offer includes Idea TV subscription offer for 3 months at free of cost and unlimited internet usage for 3 months. Internet plan include 1.6 GB free 3G data usage per month (or unlimited 2G data usage) for the first three months.

Average charges will be applicable at 3 paise per 10 kb for 3G data usage after consumption of free data benefit of 1.6 GB per month. The 2G plan will be available at a speed of 256 kbps for the first 2GB data usage and then at a speed of 40 kbps after 2 GB usage. To avail of this Idea handset offer, you should recharge with Rs 259 (recharge amount may vary +/- Rs 5 depending on your circle) after making the first call from your Idea connection. If you opt for any other pack during the offer period, that pack will overwrite the Idea Smartphone Offer benefit. You can contact the idea customer care service center to know more on this offer.