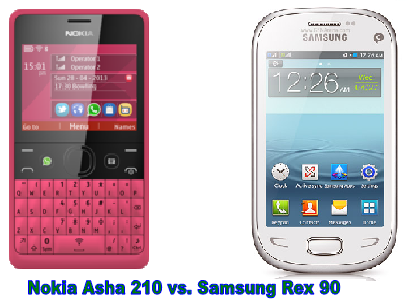 Nokia rightly called itself the company for 'connecting people'. Nokia, the Finland based company is one of the largest makers of handsets in the world. However, it had to face a fierce competition from the likes of the Korean giant Samsung, the largest maker of smartphones in the world. The other competitors in the smartphone field like Apple, LG, Huawei and ZTE have made their aggressive entry into the smartphone world. Consequently, we do not see Nokia's name among the top five vendors of the smartphones, according to the data prepared by International Data Corporation (IDC) for the first quarter of 2013. According to IDC collected data, Samsung is the number 1 smartphones maker in the world.

To make a revival first in the feature phones, Nokia launched its Asha series in the last quarter of 2011 and have so far released about 15 mobile phones in this series. Nokia called this series of phones as 'smart feature phones' Nokia Asha 210 is the latest release among the Nokia Asha series announced in April 2013, which is likely to be releases soon for retail sales. Watching the success of Asha series of Nokia, Samsung released its Rex series in February 2013. It is a known fact that over 80-85 percent Indian users of mobile phones prefer to buy low cost feature phones rather than the expensive smartphones. Quite obviously, the international, as well as the Indian phone makers, have to keep this fact in mind while manufacturing mobile phones. Whichever company can have its sway over this major chunk of mobile phone users in India, will turn out to be an undisputed king in the handset market in India.

The wonder of the smart feature phones is that these connect you online to the rest of the world. These phones also have a few other add-on features at affordable prices. Companies, such as Samsung, Apple, LG, Huawei, ZTE smartphones, Nokia etc are vying with each other to hold the top position among the expensive smartphone vendors. But, when it comes to cheap feature phones, the list of competitors is constantly growing. For purpose of this article, we shall limit our discussion to the features, specifications, reviews, prices and availability in India of Nokia Asha 210 and Samsung Rex 90 S5292, the two smart feature phones making news in the Indian market at present. 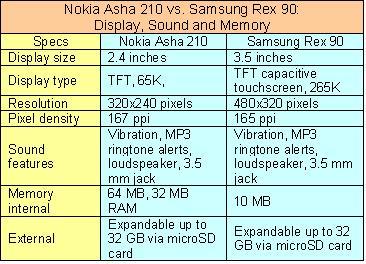 Nokia Asha 210 has a display size of 2.4 inches as against the display size of 3.5 inches of Samsung Rex 90. The type of display is TFT with 65K colours in the former. It is supported by a QWERTY keypad. The latter phone has TFT capacitive touchscreen with 256K colours. Nokia Asha 210 has the screen resolution of 320x240 pixels with a pixel density of 167 ppi. On the other hand, Samsung Rex 90 has a better resolution of 480x320 pixels with a pixel density of 165 ppi. Both the phones support vibration and MP3 ringtone alerts. Both have speakers and 3.5 mm audio jacks. The internal memory in Asha 210 is 64 MB as against very less internal memory of 10 MB in Rex 90. Both the phones support a microSD card slot to expand memory up to 32 GB. The phonebooks of both the phones can record calls and the former can support up to 1000 entries in its phonebook. The RAM in Nokia Asha 210 is 64 MB, but it is not found specified for Rex 90. 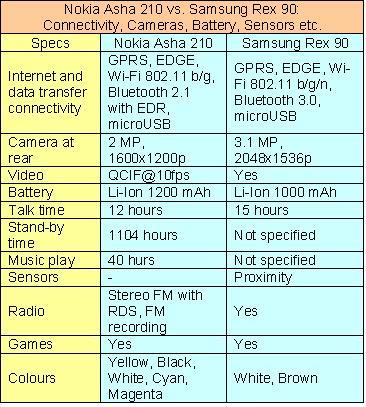 There is no mention of any sensors in Asha 210, but Samsung Rex 90 is provided with the proximity sensor. Both the phones provide messaging facilities like SMS, MMS, Email and IM. Nokia Asha 210 has a stereo FM radio with RDS and FM recording, but it is not specified for the latter. Both the phones have a number of embedded games. GPS is not supported by both, but Java is supported in both the phones. Nokia Asha 210 comes in several colours like yellow, white, black, cyan and magenta. But, Samsung Rex 90 is available only in white and brown colours. Both the phones support SNS applications. The audio format support for the former is player MP3/WAV/WMA/AAC player and the video format support is for MP4/H.263/WMV. The latter supports audio formats MP3/eAAC+/WAV player and video formats MP4/H.263 player, Both the phones have organizer and also support predictive text input.

Samsung Rex 90 has certainly got some extra features like display size, display type, display resolution, camera, sensors etc. However, it has less battery power than Nokia Asha 210. Nokia Asha 210 is a very cheap phone and the price of Rs 3,800 is easily affordable. The price conscious will be attracted towards Nokia Asha 210, but the features conscious buyer will like to buy Samsung Rex 90 even at a high price around Rs 5,500. The real picture will become clear only once Nokia Asha 210 hits the stores.

Nokia 109 phone full specifications features and price in India are given here. The Nokia 109 an entry-level phone is being designed to serve as a medium for people who wish to have an affordable device to fulfill their internet dreams. The phone which runs on Nokia's Series 40 is armed with Nokia Xpress browser which compresses the web pages up to 90 percent. Read more to know about Nokia 109, its features and its price in the Indian market.

Nokia Asha 205 full phone specifications, features and price in India are given here. With the ever increasing interest of young mobile users to get in touch with social networking sites even while travelling, Nokia has decided to give focus to such a device which would keep them active not missing any updates in Facebook or Twitter. Added to it, Nokia Asha 205 looks more attractive with its appearance having QWERTY keyboard. Read more to know about Nokia Asha 205.

Nokia 114 with Dual SIM: Full phone specifications and features out, price in India not yet

Nokia 114 with Dual SIM full phone specifications and features are out but the price in India is not yet announced. The Nokia 114 was spotted in the official Nokia's Indian website which gives much detail about the phone which runs Dual SIM. This entry level mobile phone does carry specifications, features and design similar to Nokia 109 which was announced earlier. Read more about all new Nokia 114, to be released in India next month.