Racing moto is one of the most wanted Android games for users. This game features the basis of a racing competition that how far you can ride the bike in a very congested traffic. In this game, you have to drive the bike as far as you can and the obstacles are the cars on the road which makes your ride dangerous. You need to escape through very narrow spaces between two cars and sometimes by pass the vehicle with extreme close calls. The game created a history in the highest scoring as no one in the world has crossed the 1 lac mark. So, from this, you can judge how tough the game is for the beginners. Even I am playing this game on my Android tablet but I have only scored 90000 in this game yet and this was possible for me only when I followed certain tactics while playing the game and now I am going to share these tricks or you can say tips to play this game with a huge score on the board. These tricks might even help you to cross the highest scoring limit in the game but to be honest; I have not crossed the 100000 mark yet in the game. So, let's start.

While playing any game on any device, it is necessary to follow certain tactics, tips or tricks experienced by the experts or we can say consistent players of the game to help us to play the game really well with a huge score on the scoreboard. I, being a consistent user of this game, am going to give you some of the tips experienced by me while playing the game to help you to get to the highest possible score. So, here we go…

Tap the screen to use the infinite nitrous

The game has the feature which offers you infinite nitrous boost helping you to increase the multipliers of the game. Multipliers is the rate of the increase in the score of the game and here in Racing moto, there is a maximum of 5x multiplier in the game which you can get when you use the nitrous continuously for 15 seconds and more. Once you remove your finger from the screen, the nitrous multiplier will get down to zero. So, try to take full advantage of the nitrous boost in the game. When you drive the bike without nitrous, the sensor controls turn weak which results in an early accident of the bike without even reaching to the score of 50,000. So, you need to be careful while driving without nitrous.

Drive without nitrous after crossing the score of about 50000-60000

As you know that the difficulty of every game increase as we go on. Same is in the case of Racing moto as the traffic gets denser as we cross the score of 50,000. So, I suggest you to remove your finger from the screen and drive the bike without nitrous after crossing this scoring limit. You will also notice that it is a great fun to drive without nitrous through heavy traffic and after playing the game for about 10-15 days, you will feel like an expert and no one can come into your way to beat you in scoring in the game. So, be consistent and be expert. 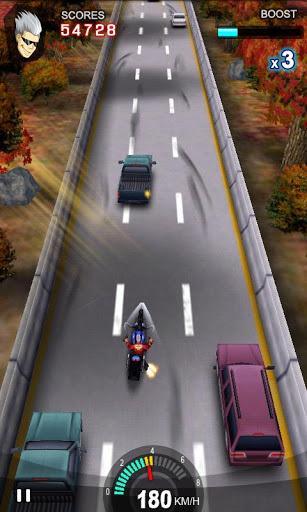 Keep your bike moving here and there

This is a very effective tip to drive to a farther distance. All you need to do is that move your bike left and right. This will help you to judge the vehicle coming from any side as the vehicle change their side from left to right or right to left. So, to tackle this problem, you will need to keep your vehicle in motion from right to left and left to right. But one thing I would like to add here is that the beginners should not try this tip for about 4-5 days playing the game as they don't have enough hold or control on the sensors of the game. So, this tip is for those who are really confident that they can do it easily without increasing their chances of crashing.

The road in this game contains two partitioning line dividing it into three lanes which is used by the vehicles to switch their sides in the game. All you have to do is to drive your vehicle on one of the two lines where there is no obstacle. But, you need to be careful because the vehicles coming into your way often change their direction which can crash you down if you hit any of them while in full speed. So, again you will need to have a good hold on the controls of the game to keep your vehicle on the right track without any accident or chance of crashing.

Unlock the other two bikes/vehicles

The store of the Racing moto offers you two more amazing bike to ride on them. These two bikes are slimmer than the default bike and help you to escape even the narrower spaces between the two vehicles and hence increasing your chancing to creating a big score. The bikes can be unlocked by reaching a score of 30000 and 70000 in a single game of more than one game. So, just follow the above four steps to reach to the score of 70,000 and get your new bikes unlocked and then create a history in scoring highest in the game by crossing the maximum score limit of about 100000.

These were some of the simple tricks to play the Racing moto game with ease and to create a big score in the said game. By following the above top 5 simple steps in the Racing moto Android game, you will definitely reach to a very good result regarding the scoring in the game. So, have fun and play well.

It is king of all games!

I have completed 101365 in Racing Moto but it is a really hard game!

This game is very tough but I love this game and also my highest score is 104566.

I have scored 1 lac 6 thousand, but want to score more. Tell me some tricks.