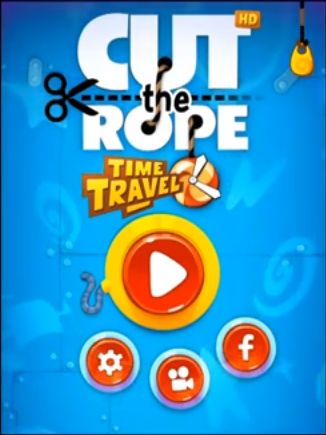 Cut the Rope – Time Travels is the advanced version of the 'game cut the rope'. The game was developed by Zeptolab. The game is available for Free for android, iPhone, and iPad users. The Cut the Rope is a game where the player should cut the rope of the hanging candy to feed the little creature. In this latest version, the little Om nom character travels into the past to feed the candies to his ancestors. In this new version we find 2 Om noms and the player should feed 2 candies for both in all the levels. 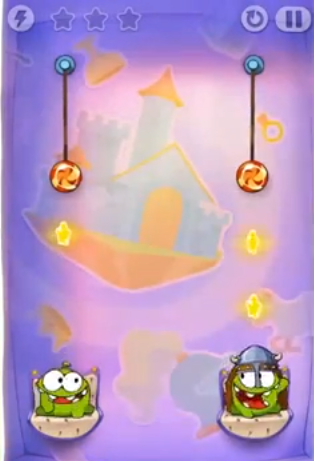 The new developments in this new version are like, freezing the swinging candies with a tap button; long heavy chains and timing of bombs to get extra boost points. The blades and bombs were already introduced in the last version. In the first few levels in early stages, the game will be done so easily with easy steps that you would finish them within minutes. The physics logics are used to the cut rope. The scientific logics are wonderful and the graphics make the player more excited. 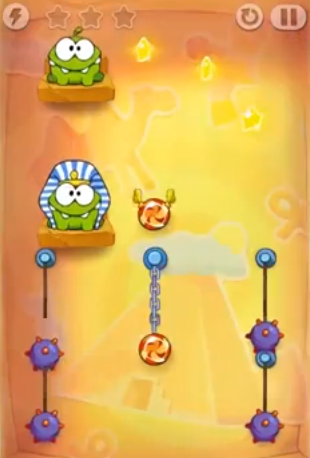 The game contains various stages and in each stage there are 15 levels. To cut the rope, player should just slide finger across the rope. The player should collect 3 stars in each level and feed the candy to Om nom. The stars are to be collected to unlock the next stages. There is no rule to collect all the 3 stars in all the levels. You can even replay the level for any number of times. In this version, the player finds all the physics logics to cut the rope. So the player should think well and cut the rope to collect all the stars and feed the candies. You can restart the level by tapping the "Restart" button on the top. 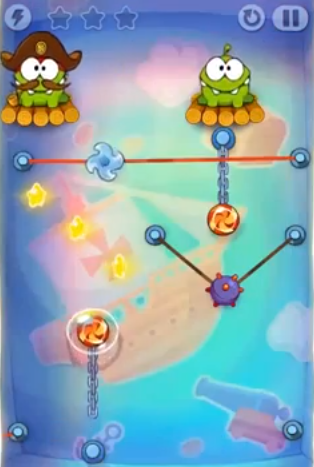 You can purchase "Super Powers" to make the game timing slower. Before starting every level a tip is popped up, so that the player gets an idea to cut the rope. When the candy drops in the bubble, the player should immediately stop it; if the bubble doesn't drops down. The player should find the logic to cut the hard swinging chains with swinging blades without breaking the candy. Every stage needs particular number of stars to unlock the next stage. If you haven't gained them once, you can re-select the previous stage and play the easy levels to gain the stars. 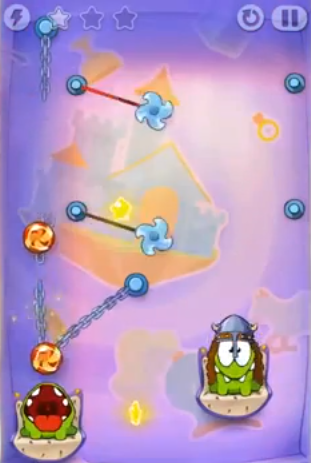 The pros of this Android game are simple and cute graphics. Game improves logical thinking of the player. It has Sweet music. Two Om noms creates excitement and freshness to the player. Physics logics are to be used to cut the ropes and feed the creatures. And Con is that the levels can be completed in very less time. As a conclusion, I rate this game as 4.8/5. These games come under logical or puzzle type of games. This game is apt for adventure loving and science loving players.