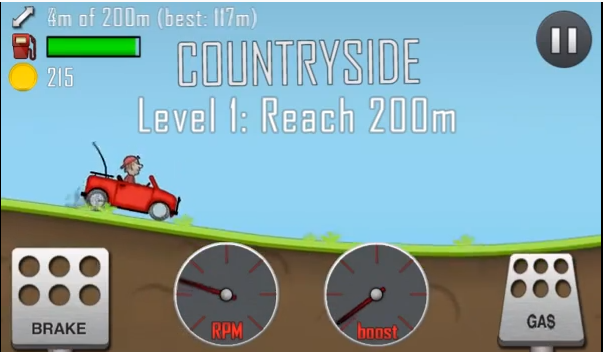 Hill Climb Racing is a new racing game which is available for free for all the android users in the market. The game is very user friendly. Even kids can handle the game. The Hill Climb Racing is a game where the player will be given a simple jeep and should move on and collect all the coins coming in his way. Level will be upgraded through how many meters the player completes. The player can renew the fuel from canisters which are available on the path. If the player hits to the ground and breaks his neck or drains-out the fuel then the game stops. The game restarts from the start point and not where the game had stopped. The path contains lots of bumps and high peaks. 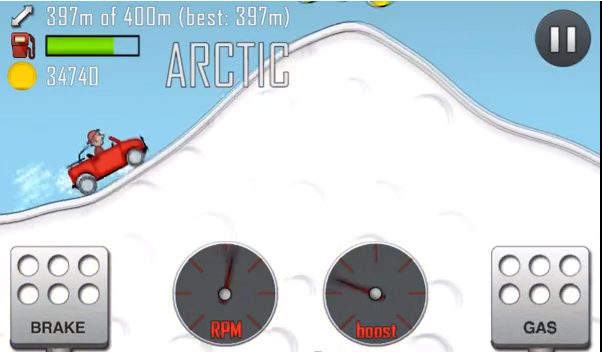 Extra bonus points are gained when the player remains in air through jumps and turnovers. The player can see a "Gas" and "Brake" taps on the screen. By tapping the "Gas", vehicle gets speeded up and the "Brake" helps in controlling the speed. The player can upgrade the vehicle's engine, suspension and brakes using coins. By upgrading the vehicles, player can easily climb the peaks and pass through the bumps. Few vehicles such as Tanker and Rally cars are most suitable for almost all the stages. The "Moon" stage has no gravity to the car so the player will zoomed up in to the air and can gain more coins. But the player should be careful while landing and should even check the petrol level as well. The "Forest" stage contains lots of trees in the way, which the player should go on cutting them to clear his path. 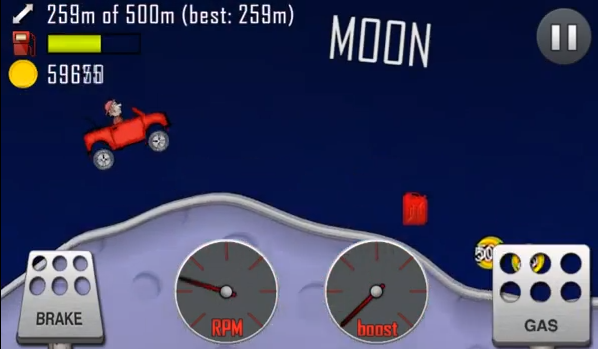 There are many other vehicles available which the player needs to unlock with the coins. Like, Motocross bike, Monster truck, Quad bike, Race car, Super diesel, Rally car, Tanker, Snow mobile and Truck. At present there are 11 different stages like Countryside, Desert, Arctic, Highway, Cave, Moon, Mars, Alien planet, Arctic cave, Forest and Mountain. Each stage can be unlocked using particular amount of coins. So once they are gained you can unlock the further stages. Game has been updated up to now and introduced new stages. Do update the game when required for more interesting stages. 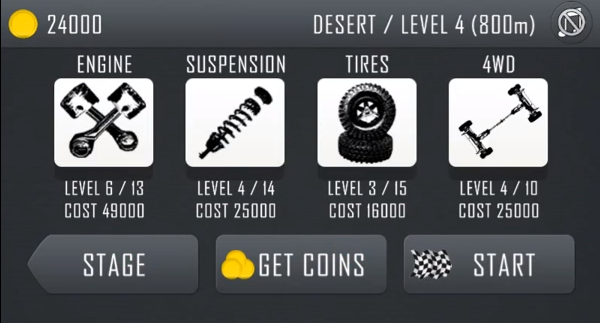 Pros of the game are clear, neat and excellent graphics. The graphics are super clear in any android phone. Game is available for free from the market. Sound resembles same as real cars and bikes. You can share your scores and screenshots online with your friends. The game can be moved to memory card. Con is only the paths which are almost the same in all the stages which make us feel bored at times. If you wish you can purchase coins using dollars. I rate the game as 3.75/5 as it's user friendly and even kids can have lots of fun. Game comes under racing and adventurous type of games. I recommend this game for racing lovers and kids above 5 years.

Read The Crew review: Cheats, tips and tricks to play