The well known brand in the mobile handset manufacturer category is Nokia and now a days they are manufacturing not only high tech mobile phones but budget mobile handsets as well. Right now there are many android mobile handsets in the market, but most of the customers are reluctant to use those handsets, as Nokia Symbian operating system is user friendly as well as it is pretty simple to understand. Hence, there are a lot of mobile handset users who aim for Nokia mobile handsets. Also, day by day, the tariff rate of each and every telecom service provider company is fluctuating only because their aim is to attract more number of customers.

The ultimate result of this competition amongst the telecom service providers is that the customers will have lucrative options and due to this every mobile handset owner bears two or more SIM cards. As per the service usage, the users keep switching between SIM cards of several telecom companies. In this way, Nokia has rightly spotted out that the mobile handset owners need a handset that will have a SIM card swapping feature and that too without switching OFF the device. Therefore, Nokia has the budget mobile phones under the dual SIM and single SIM category called as Nokia Asha 200 series. In this series there are five handsets that are mentioned below and all of them have large external memory storage.

This mobile handset is the basic phone which is dual SIM type and has a button qwerty keypad which helps to type texts faster than the conventional mobile handsets which had only few button keys. Amazingly, this budget phone can connect to internet by means of GPRS or EDGE connection and the user can access social networking features as well as they can check emails using this budget phone. The price of this budget phone is Rs 4,188 and it has a camera that can snap photographs of the size 1600 by 1200 pixels. If only music is being played on this device, then it is said that this device can work for more than 50 hours provided its battery is fully charged. So it is one of the best music phone which can play long hours of music without draining the battery at higher rates. 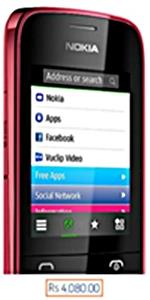 This device has a SIM card of the type mini-SIM and it lacks in the dual SIM feature. The specifications of this handset are similar to the above mentioned Asha 200 handset and the only difference is that this Nokia Asha 201 has a higher internet access speed. Also this device is priced at Rs 3,880 which is quite lower than the one mentioned above.

This device is a dual SIM type and the outstanding feature this device is that it has alpha-numeric keypad as well touch-screen display panel. As the display screen is of resistive touch-screen, it offers only swipe and scroll feature and similar to above mentioned devices; this device is also designed to offer higher internet access speed.(Image view of this handset is on the right side) This budget phone is tagged with a price of Rs 4,080.

This device sports dual SIM card feature and it has a dedicated Facebook key which will help the users to update their status and read their friends status updates as well. In this device there is a Nokia Xpress Browser that helps to navigate at a greater pace between the social networking sites and other apps or website pages. All in all, this browser is said to be 2 times faster as compared to the conventional browser. This handset has a Slam feature which helps to share files between the two phones without pairing them.

The device comes with a preloaded eBuddy messenger that helps to access Yahoo! Messenger, Facebook Chat, GTalk and Microsoft messenger at the same time. The newly launched Nokia Nearby app is also preloaded onto this device which helps to find the ATMs, hotels, etc within the local area. At last, this device is a must pick for all the users who love to play games on mobile handset. Here, the Nokia Asha 205 owner can download whopping 40 games designed by renowned EA Sports and that too free of cost. The cost of these games is near about 5000 bucks, but the users can avail this offer until it exists. Right now the cost of this Nokia Asha 205 is around Rs 3,523 plus free download of 40 games designed by EA Sports. 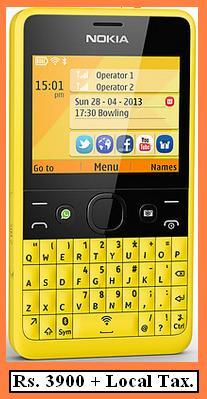 The Nokia Asha 210 is a new launch and it seems that this device will be available to order by mid of May 2013 in India. The ergonomics of this handset is quite similar to the Nokia Lumia series phones and it really is a stylish device which has a crisp clear screen as compared to the above mentioned budget phones. The astounding feature of this device is that it has a 32 MB of RAM and its external memory can be increased up to 32 GB by means of a microSD memory card. Another feature of this affordable budget phone is that there is a special key on its keypad which will directly take the user towards most popular mobile application – WhatsApp. Similar to this, the other social networking apps can be downloaded and accessed with higher speed.

The device has a 2 MP camera and it also offers a function where the users can click images in the form of portrait images and share them on social networking sites as well. This budget phone is a dual SIM supporting device and it can also swap them without switching OFF the handset. In terms of data connectivity features, this device supports Wi-Fi as well as GPRS and EDGE internet connectivity. Again this handset is also being coupled with free games download like Bejeweled, FIFA 13, Medal of Honor, Need for Speed Shift, etc.

Do you prefer a QWERTY keypad over a touch pad and are searching for a smartphone? Then stop your search right now because we bring you the top 5 QWERTY smartphones available in the year 2013.