The MSI GT70 ONE laptop is one specially designed for you if you're an extreme gaming enthusiast. The best thing in the laptop which makes it the best laptop for gaming is the 4 GB graphics memory which will take the entire load away from your main memory and help run the game even in the highest graphical settings. It is powered by a 3rd generation i7, which is the latest processor available as of today. The even amazing thing is that it has a RAM of 16 GB which makes multitasking very fast. This 17.3 inch full HD laptop has Windows 8, the latest operating system from Microsoft, pre-installed on it which will always allow you to stay in touch with the latest advancements in the technology world.

There are many improvements made in this laptop because it is going to be used for playing games more often. The keyboard is designed in such a way that you won't feel it to be a weak one for playing games. The audio system is also designed for crystal clear audio fidelity. The special arrangement of two hard disks together gives you a transfer rate of 1000 MB/s which will load your programs and your operating system real fast. You can also select different color themes for your keyboard lighting. There is also a Blu-ray player to help you out with the latest multimedia.

So, let's get a closer look at the technical specifications of the MSI GT70 ONE laptop. 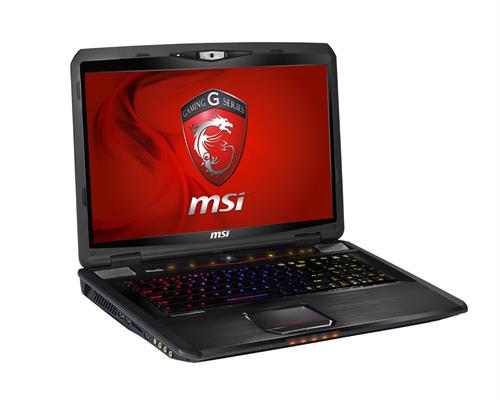 Processor
This laptop is powered with the latest 3rd generation Intel Core i7 processor. It has an Intel HM77 chipset. It has a clock speed of 2.3 GHz which can be easily boosted with one-touch overclocking up to 3.3 GHz. So, you can run your favorite games or software without any lag.

Memory
This laptop offers a 16 GB DDR3 RAM. There are 4 slots for main memory, with the help of which, you can extend your laptop's RAM up to 32 GB which is pretty amazing feature available on this laptop. Multitasking can be performed with ease with such a large amount of RAM. I think 16 GB RAM is more than enough for almost all the games out there in the market.

Display
The 17.3 inch LED display screen will let you watch everything on your screen pretty easily. The screen has a resolution of 1920 X 1080 pixels. You videos and games will look crystal clear with this full HD screen resolution. The anti-reflection feature of the screen lets you watch the screen without any strain on your eyes.

Operating System
This laptop comes pre-installed with the latest Windows 8 operating system. It will make your laptop look great with its amazing graphics and also make it compatible for most of the latest software applications and games to run smoothly.

Storage
The arrangement of hard disks in this laptop is amazing. There are basically two hard disks. Along with the main hard disk there's also an SSD hard disk of lesser storage capacity which runs up to 60 times faster than the traditional hard drives. So, you can run your operating system or software applications on the SSD hard disk which will make it load with lightning speed.

Graphics
This laptop has the nVIDIA Geforce GTX680M 3D graphics card. It has a graphics memory of DDR5 4 GB which is exceptionally amazing. With such a huge amount of graphical memory there won't be any game in the market that you won't be able to play.

Interface
The best thing about this gaming laptop is that it has 5 USB ports. Two of them are 2.0 USB ports and three 3.0 USB ports which are very useful if you want to hook up some joysticks and external mouse to your laptop for making your gaming experience more fun. It also has a D-sub VGA port, an HDMI port (ver 1.4), a microphone in jack, headphone out jack and a line-in jack.
There is also a card reader for connecting your memory card to the laptop without the need of any external card reader.

Connectivity
There is a Bluetooth of version 4.0 for quick transfer of data from your smartphone or any Bluetooth device that you have, to your laptop or vice-versa without any cables. There is also a support for Wireless LAN of 802.11 b/g/n.

Webcam
There's also a web camera for video chatting. The amazing thing is that it is 720 pixels with 30 frame per second. So, the person with whom you're conducting video chatting will be able to see you in HD quality.

Battery
The laptop has a battery with 9 cells. It has MSI exclusive ECO engine. This gives a battery backup of up to 3 hours depending on the games you play and the software programs that you run.

The bottom line and Review

The MSI GT70 ONE is a perfect device for gaming. It has got a nice design and also customizable keyboard lighting with around 1000 different combinations available to set it differently according to the different mood of the games. There are also some competitors to this laptop like the Alienware M17. But this laptop has got a 4 GB graphical memory which is not available in other rival laptops. Other than that the 16 GB memory is simply amazing which can help in running different software or games at a time.

The only drawback that some people complain about the laptop is that the company's customer support is not so responsive. But with such a long list of pros you don't have to worry about that a lot.

This laptop costs $2,351.99. So, if you're really willing to spend some money on the best and fastest laptop for gaming or multimedia use, this laptop can be your first choice. It can prove to be worth your money.

MSI GT60 ONF 419US - a perfect workstation for gaming

Are you looking for a powerful gaming workstation? Yes, that's what the MSI GT60 0NF-419US laptop is called. It is called so because of the immense power and high technical specifications that it has to handle any kind of graphics out there. If you are not too much concerned about spending a lot of money on a laptop and just opting for high performance then this is the one for you. Read on to know more about MSI GT60 laptop and also the pros and cons of the workstation.