Processor unit or chipset is available in the specification list of the each Android smartphone. The awareness about a processor is less among the people. The price and performance of the Android smartphones determined by its processor speed and capacity. It is actually a chipset or SoC and is commonly misunderstood as processor. The chipset is the heart of the mobile and it is a similar to the CPU in PC. It consists of graphics card, registers, processor and other components, which integrated in a single chip. Below is the example of how the chipset is: 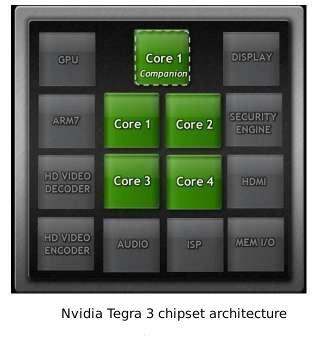 Now, We can imagine, how the chipset looks like. The duty of chipset manufacturer is to make up the components in a very small size. Most of the manufacturers are using the ARM processor as it consumes less power and very suitable for the portable devices. However, ARM is not only the processor available in the market as there are several other processors like Scorpion from Qualcomm also available in the market. Overall it is clear that, the processor does not matter as all the manufacturers using the same processor. If you test the different chipsets using the same processor, the benchmark ratings will differ. Here I am going to give you the details about the top 5 chipsets that received the highest benchmark ratings.
Note: A benchmark is a tool used to calculate the performance of the CPU. It automatically runs a complex script in the mobile and displays the score. The higher value is the best.

Nvidia Tegra 3 built under 40 NM fabrication technique. This chipset is capable to have a quad - core processor with the 5th dedicated core for the battery power saver. The maximum clock speed of the processor can be set up to 1.7 GHz for single core and 1.6 GHz for quad-core. It has 1 MB of L2 cache memory and 32KB L1 cache memory per core. This chipset is capable to embed up to 2GB of memory. The GPU architecture used in this chipset is ULP GeForce and the performance is 3x of Tegra 2 (its predecessor). GPU boasts 12 cores, 3D stereo, full programmability, OpenGL ES V.2, and OpenVG 1.1. The smartphone with this processor is capable to encode 1080p video. This processor can support for 32 MP primary camera and 5 MP secondary camera. The camera features helps for auto exposure, auto white balance, auto focus, lens shading, de-mosaic, sharpening and programmable de-noise can be enabled. HDMI port can be embedded and we can use 2 simultaneous display controllers. Resolution for LCD can be set up to 2048x1536 and for CRT up to 1920x1200.

Google Nexus 7, Asus Transformer Prime etc using Nvidia Tegra 3 chipset. So if your Android smartphone specs has chipset as Nvidia Tegra 3, then your mobile is going to do the wonderful tasks.

Exynos 4 Quad built under 32 nm fabrication technique, it is little bit smaller than Tegra 3. It has a power-efficient quad core processor to improve the battery performance. Its processor consumes 20% less power when compared to other. Its dedicated 3D graphics sector allows you to run 3D gaming. It has an internal ISP technology and allows you to take DSC like pictures. Full HD video of 1080p playback is capable by this chipset. Samsung introduced multi format CODEC technique, which allows you to run video without need of encoding.

Intel is still no.1 brand in chipset manufacturing. They concentrate more for PC rather than the smartphones.

There are several models under Snapdragon S4. Most of the Windows 8 mobile phones using this chipset. Qualcomm ranks second in system on chips (SoC) production. They created their own processor named as Scorpion. The architecture of this processor is very similar to ARM. But, claimed to have a higher multimedia performance. Their quad-core chipset model is Play MSM8225Q, has inbuilt Adreno 203 (HD/720p) GPU. Karbonn Smart Titanium 1 is using this processor. There are many other models from Qualcomm that gives the quad-core option. Android smartphones like the Nexus 4, HTC Butterfly, Sony Xperia Z using Snapdragon S4 Pro APQ8064, it is the best of Qualcomm. So make sure if any smartphone that using Snapdragon S4 Pro APQ8064 model chipset, then your mobile phone rocks.

I don't have the benchmark score for latest handset using APQ8064 model. I swear that it will score even higher.

Mediatek MT-6589 is the revolutionary SoC that is available with low-cost. Without this chipset you can not imagine the mobile phone like Micromax A116. Mediatek MT-6589 is the processor, that powers the all quad-core mobiles manufactured by Micromax, Lava and Karbonn. This processor is not popular in the US. But, its usage growing in other countries like India, China and other Asian nations. Mediatek chipset using ARM Cortex-A7 processor and the same is used in Nexus 4. Benchmark rating shows that the chipset is almost as powerful as Snapdragon Pro.

Thanks for this article on quad core Android smart phone processors. It improved my knowledge considerably!