Pros and cons of Papa Pear Saga
Pros: Impressive changes over the Peggle formula. Gameplay period is much longer when compared to Candy Crush Saga.

Cons: Power-ups within the games are highly expensive and are not available for free. 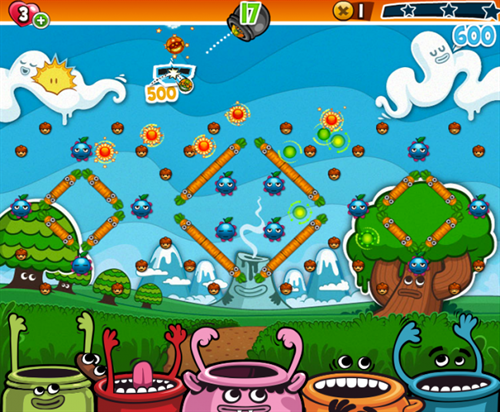 The game delivers an excellent set of controls along with a perfect user interface. Papa Pear Saga works as simple as shooting objects up in the air. Assume Papa Pear as a game's ball and shoot it by adjusting your shot in the canon using the mouse and click on it to perform your action. After letting Papa Pear to fly, you can now see it bouncing from one peg to another, which are in the form of various fruits and nuts. In Peggle-inspired game board you will be assigned to clear off certain amount of pegs according to what the game objectives instructs you. Papa Pear Saga delivers plenty of other objectives which will be discussed below.

There are five different pots placed in series near to each other under the board. Most objectives in this game will instruct you to knock out at least one Papa Pear in each of the pots. Many other times you are also asked to clear off a particular peg from the game board. There are even objectives, that tell you to take down the large fruit pieces into any of the five pots. There are various objectives within this game that may remind you of the popular Candy Crush Saga. 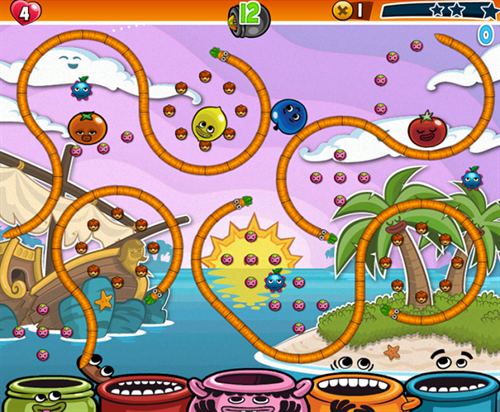 As you move further deep into the game, the goals that you need to accomplish will be more and more difficult. One example for a difficulty level in Papa Pear Saga is that, the pots that we talked about it earlier will now be almost in closed form due to the obstacles that you will find above it. These obstacles are easily destructible and you will need to clear off the barriers from the desired pot before the landing of the peggle.

In the game Candy Crush Saga, there are lot of areas where you can lose your life quite easily and wait for the lives recharge that performs after a particular period of time. Unlike that game Papa Pear Saga is very good as you can play for more time before even losing one life. But like in Candy Crush Saga, there is also a particular time period for recharging the lives in this game.

Papa Pear Saga is a nice and impressive game that offers a variety of features along with the in-game mechanics that remembers the popular games like 'Candy Crush Saga' and 'Peggle'. The only con that you can feel to be disgusting in this excellent game is it's power-ups. Not that the power-ups are useless, but boosts and power-ups can be only gained through giving away some real money. If there was a feature for gaining in-game currency through achieving various bonus, point multipliers etc would be an excellent option for gamers looking to enjoy maximum without paying a single penny. Also, the game felt at times to be a slow-paced one compared to that of 'Candy Crush Saga' that makes yet another con of this game.

If you are ready to bear these issues, then Papa Pear Saga is an excellent game and especially if you are Peggle fan. Although this is a better game with lots of fun hours, it is not the best from King as the fans are expecting them to develop something to play which is completely unique.

I have been playing Papa Pear for awhile and have enjoyed the game. There are/were a few challenges that were frustrating so I would take a break from it. I have started up again and just today, having 7 gold bars in my bank, I decided to add 100 + 15 to them for a total of 122. I then purchased 6 + 3 lite up pins for 18 gold bars. Imagine my surprise when I saw that I had 86 bars left! The game charged me twice! Now THAT is a HUGE problem! How do I recoup?

Does papa bear end after level 540?