Google has just amazed everyone by launching the Asus Google Nexus 7, 32GB 3G WiFi model. This tablet cum PC has beaten each and every competitor like Apple iPad mini, Samsung Galaxy Tab 2, Amazon Kindle Fire HD etc. Before this model, Google had launched the predecessor of it i.e. the simple Google nexus 7 which wasn't able to compete with its tough rivals regarding connectivity, storage etc. But, this time the 32 GB 3G and WiFi model of Google Nexus 7 has made it possible to withstand the tough competition of the modern era and it has emerged as the topper in the list of the best tablet PC's.

The best thing about this tablet is that it has been titled as the world's lightest tablet PC as it weighs just 340 grams which is much lesser than other tablets and even the smartphones, hence, making it easy to handle and carry. There is much more about the unique features of this tablet which, when compared to other tablets, always appear to be in the stronger side. Comparing the Google Nexus 7 with Kindle Fire HD is really a tough job as both the tablets are worth catching attention of the audience by their salient and unique features and specifications. So, let us start the comparison of Kindle Fire HD with the newly launched Google Nexus 7 32GB 3G model. 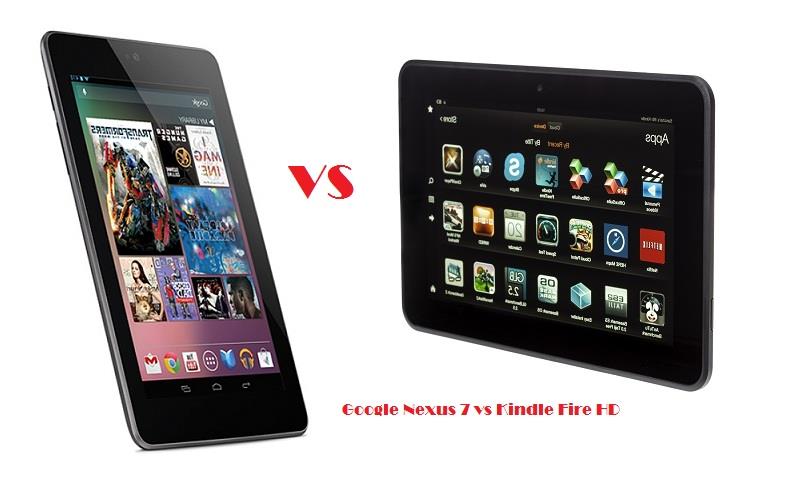 Winner: The winner of the war in the field of better display and dimensions is clearly the one and only Google Nexus 7 because of its brighter screen and less width than the Kindle HD.

The operating system of both the devices is based on the Android platform. Google Nexus runs on Android 4.1 (Jellybean) while the Kindle Fire has OS of the customized Android version which is not as efficient as that of the Jellybean. In case of the availability of apps and games in the Google play store, Kindle Fire is left behind by the Nexus 7 and hence, leads in the front in this field also.

Winner: The winning position in this field has also been captured by the newly launched Nexus 7 because of the presence of higher version of Android operating system and the higher availability of apps and games from the Google android market.

Winner: Also, in this field, the Nexus 7 has held the stronger side by the introduction of NVIDIA Tegra 3 processor. So, the clear cut winner is Nexus 7.

This field of the war between the two tablets hold a tie as both the tablets come with a RAM of 1GB and an internal storage of 16/32 GB and hence both the tablets are equally featured regarding the memory and storage capacity. The two variants i.e. 16 GB and 32 GB are available at different prices which we will come to know later.

Winner: No one has emerged as a clear cut winner in this field. So, the result is none other than a tie.

Winner: No one has emerged as a winner. So, this field also ends up with a tie.

The biggest difference between the two tablets lies in the feature of weight. Google Nexus 7 has been honored as the world's lightest tablet computer so far as it weighs just 340 grams while the Kindle Fire HD is 55 grams heavier than it i.e. it weighs about 395 grams. The weight of the devices creates a huge difference and while comparing these two tablets, this point has become a great point of discussion and always the Nexus 7 has proved to be on the stronger side than any other tablet PC in the world as its weight makes it very easy to use, carry and handle.

Winner: Clearly, the winner of the battle in this field is the one and only Google Nexus 7 with its light weight and the property of easy to handle/carry.

Winner: From the above information regarding the battery backup, one can easily judge the winner which is the Google Nexus 7.

Price of both the tablets

The price of Kindle Fire HD in the Indian market is about Rs 19,000 only while Google Nexus 7 comes with a price tag of about Rs 21,999 in the Indian market. The price of Kindle Fire is low because of its lower features than Nexus 7 but after a continuous defeat, Kindle fire has emerged as a winner in this field overlooking its features and specifications for a while.

Winner: Clearly, the winner in this field is Kindle Fire HD as it is priced at a lower tag than that of Nexus 7 in the market. 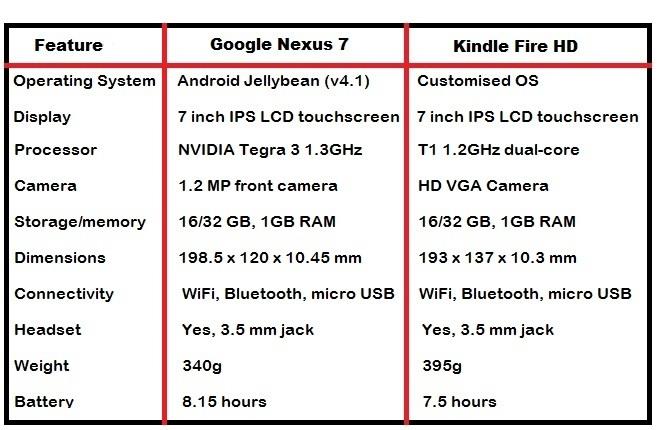 Winning summary of the comparison

The winning summary of the above comparison is as follows:
Display and Dimensions - Google Nexus 7
Operating system- Do
Processor- Do
Memory and Storage- Tie
Connectivity- Tie
Weight- Nexus 7
Battery backup- Nexus 7
Price of both the tablets- Kindle Fire HD

For the above given data, Google nexus 7 has emerged as a clear cut winner with a final score of 5-1 (with two ties) and the 1 field, where it has been defeated by Kindle Fire is the field of Price. Other fields are either dominated by Google Nexus 7 or end up with a tie. So, we can say that Google Nexus 7 is far better than the Kindle Fire HD and if one wants to buy a tablet at this range, he/she should definitely go for the one and only Google Nexus 7. But we must not underestimate the Kindle Fire HD as it is really a tough competitor for Nexus 7 but ultimate winner is the one and only Nexus 7.