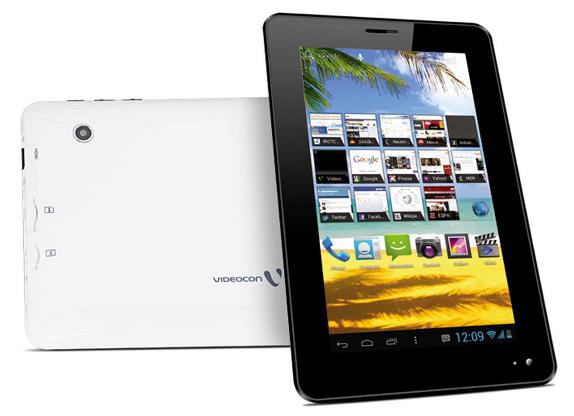 The fast escalating demand for voice calling tablets have brought more manufacturers to get into the arena adding more fire to ongoing tablet war. Videocon which entered into the tablet market in December 2012 has unveiled yet another budget tablet Videocon VT75C Tablet for the tech enthusiasts.

Videocon has already introduced VT10 and Videocon VT71 tablets in the Indian market which offers respectable specifications and features. The Videocon VT71 is currently available for online purchase for Rs 4,814 while VT10 can be purchased at Rs 10,667.

The Videocon VT75C tablet houses a 7 inch LCD multi-touch capacitive touchscreen display with 800 x 480 pixels resolutions. The tablet which comes with a thickness of 11.7 mm makes it more than the average thickness of other budget tablets. Powered by a 1GHz processor and 512MB RAM, the tablet runs on Android 4.1 Jelly Bean OS. There are quite a few budget tables which do hold 512 MB RAM which are Videocon VT71, BSNL Penta IS701C, Ubislate 7Ci and Micromax Funbook Infinity P275.

Regarding internal storage, 4 GB memory has been added which can be expanded up to 32 GB using a micro SD card. As the major part of the internal memory is consumed by the OS and pre-installed apps, users have to depend upon a micro SD card. A 2 MP rear camera can be used to capture photos while a 0.3MP front camera would serve as an additional support while making video calls. 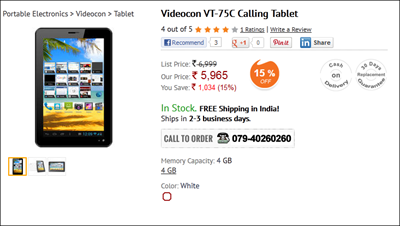 The Videocon VT75C is currently available in India for online purchase at Infibeam, a popular online retailer site. The other budget tablets which are compatible with the Videocon VT75C are Zync Dual 7.0, Micromax, iBall Slide 3G 7334, Lava E-Tab Connect Z7C and Penta T-Pad Ws708C. The white color variant of the device is which comes at a Rs 5,965 with 15% discount than the normal price Rs 6,999. With cash on delivery and 30 day replacement guarantee, the tablet will be shipped within two to three days. If you plan to buy the Videocon VT75C Tablet, do place your order at Infibeam.

Videocon Mobile's next venture has successfully marked the evolution and expansion of its tablet portfolio with the latest release of Videocon VT71 Tablet that runs on the latest Android 4.0 Ice Cream Sandwich Operating System. Take quick look at the post to grab the specifications of the Videocon VT71 Tablet.

Videocon mobiles launched another Android based smartphone, Videocon A27 which has dual-SIM support and that too for just Rs.5999. Here we are providing the features, specifications and price of Videocon A27 in India.

Videocon launches their new medium price ranged 5-inch A55HD Android smartphone in the Indian market. It offers high quality experience and houses 1.2GHz quad-core processor with dual-SIM. The handset is now available to pre-orders at HomeShop 18 at a lesser price. Read this post to get specifications, features, price, availability and reviews of this Videocon mobile.