Before we relocated from USA to India, I bought a new Apple iPhone from AT&T wireless network. I bought with a post paid plan on a discounted price and paid the monthly charges of about $100 for the first month. After using it for a month, I broke the 2 year contract and paid an early termination fee of $325. The total cost to own this cool iPhone was about $550 to me.

I was hoping I will be able to jailbreak the phone in India easily and use it smoothly without much hassle. But my initial efforts to get the AT&T locked iPhone working in India miserably failed. I took the phone to several places where I thought I could get it unlocked, but could not get the iPhone 4 unlocked.

Finally, I got a Gevey Ultra from USA which helped to get the iPhone work in India. I had to wait several days before I could get the Gevey Ultra to India and start using the phone.

Read: how to unlock iPhone

How to use iPhone 4 in India

These are the steps I followed to get my iPhone 4 work in India:

1. Got the locked iPhone from AT&T in USA, after paying the early termination fees and various other charges, resulting in a total cost of US$550)

2. Bought a Gevey Ultra from http://applenberry.com to a USA address and then brought it to India with the help of a friend who was coming from USA. The Gevey Ultra looks like a regular SIM card, but has a small pocket which can hold a micro SIM card.

4. Using scissors, cut the edges of the Airtel Pre Paid SIM card to the shape of a Micro SIM card so that it will fit in the pocket of the Gevey Ultra. (When you cut the Airtel SIM card, make sure you do not cut the chip portion of it. Cut the edges carefully)

5. Insert the trimmed down Airtel SIM (which look like a Micro SIM now) to the pocket of Gevey Ultra

7. After you place the Gevey Ultra in to the iPhone, you have to go through a set of instructions provided by Gevey for the iPhone to recognize Gevey Ultra as a valid SIM card.

(If you restart your iPhone, the Gevey settings will be lost and you will have to repeat the Gevey setup process to use your phone again).

You are all set to start using your iPhone in India as a regular cell phone in Airtel network. Same steps will work fine for other cellular networks like Vodaphone, Tata, BSNL etc.

How to connect iPhone 4 to Airtel prepaid internet in India

It has been about 3 months I am using the iPhone 4 in India with Airtel pre paid network. However, I still didn't have internet connectivity, except for the WIFI from my home. I was disappointed that I am unable to use internet in an expensive iPhone. Actually, the real problem was, I did not put enough efforts to figure out to activate internet.

Activating internet on a cell phone sounded like a himalayan task to me, and so I kept postponing it for a later day. I got conflicting information on how to get this done. Some people said all I have to do is, just recharge my iPhone with an Airtel prepaid plan that supports internet connectivity while few others said I have to call Airtel and make a request to enable internet in the phone. (It was news to me that plans with different amounts mean different features.... no wonder why many recharges I did in the past to the cell phones I borrowed from others did not do any help to them. I have been recharging the borrowed phones with different amounts before returning the phone as a gratitude for allowing me to use the phones.)

Recharging the iPhone with Airtel prepaid plans to connect to internet

Last week I walked in to a small shop where they do mobile phone recharging. I asked them what should I do to get internet activated on the phone. They said I just have to recharge my phone for 98 rupees and then internet will be automatically activated. I paid the money, walked back to home and waited indefinitely to see internet activated on my phone but nothing happened.

This morning my wife wanted to go out with the phone and wanted to have internet so she could read reviews and check prices online before buying some home appliances. I tried to ask for more time, but as usual it did not work with her. So I picked up the phone and called Airtel asking for steps to activate internet.

Airtel customer support recognized my phone is an iPhone and they gave me the steps to configure the phone to connect to internet (they mentioned internet is already activated on the phone and it is the wrong settings that made it not working yet).

Settings on iPhone 4 to connect to Airtel internet

These are the steps given by Airtel customer support to connect internet on my iPhone 4 and it worked for me. 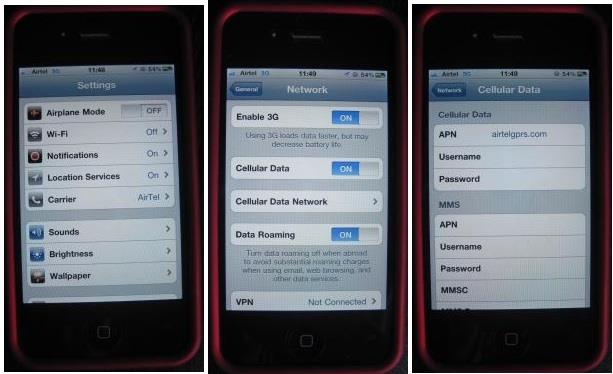 Step by step instructions to enable internet on iPhone with Airtel

Enable 3G: ON
Cellular Data: ON
Data Roaming: ON
VPN: Not Connected
WIFI: OFF (just to make sure your internet connection is working without WIFI)

7. For "APN", type the value "airtelgprs.com" (without the double quotes)

All settings are auto saved. Now go back to your home screen and open the Safari browser. Try to visit Google.com. It worked for me on the first attempt itself.

(Some people have reported that they had to restart the iPhone before the it could connect to Airtel internet data plan).

Read Key features of Apple iPhone 6, its price in India and review

Thanks so much. Your post is very helpful. We have a motel business in USA and need to stay in touch from India. Dont know howto do it so that the manager can call me in India on my iphone and I can also cal him in USA on landline. Any and all help on this will be greatly appreciated

I am purchasing a used iPhone 5 from Bangkok which is officially unlocked and want to use it for my regular basis like internet, calls and stuff. So what should I check in iPhone before buying it? Will I face any problem? I'll be using Airtel with it.

The only thing you need to make sure is, it is unlocked and is in working condition. I am not sure how can you really check it. Probably you just have to trust them and take the risk, if you are getting a good deal.

I have iPhone 5c .. does its settings will work as your iPhone 4 had worked??

Is there any internet network problem if the sim is not cut properly. I am facing the prob with Iphone 4s.

How can I connect to SIM card without it?