Many people who return from USA to India are carrying an iPhone with them since they are pretty expensive in India. It used to be pretty easy to unlock an iPhone in the past, but not anymore. Even if you manage to unlock or jailbreak an iPhone 4, jail breaking the phone comes with its own problems.

Are you planning to bring a locked iPhone 4 to India? Don't forget to bring a Gevey Ultra SIM or a similar device to make your iPhone work in India.

My next hope was, I could unlock the iPhone 4 in India without much efforts. But after hearing the post-jail break problems and the cost involved in unlocking itself, I decided to go for a Gevey Ultra SIM, which can be used to make the iPhone work with any carriers, without really unlocking or jailbreaking it.

How does Gevey Ultra SIM work? 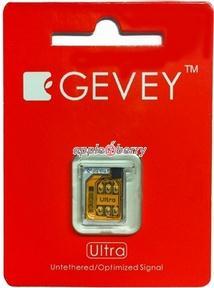 GEVEY Ultra is a SIM interposer to unlock iPhone 4 and make it with any GSM carrier in the world.

Gevey Ultra has a small pocket which is sized enough to hold a regular micro SD Card.

will it work with ios 7?

Does it works for iPhone 4S?

My iPhone 4S was working fine in Saudi Arabia but now I am here in India. My iPhone is not working in India. Please tell me how to make this work.

Will it work for iPhone 6?