What is GPS technology and how it is useful?

GPS – stands for "Global Positioning System", a technology that ensures you enjoyable hassle free trips. It helps you in finding out your location whenever you travel to any unknown place. You can also take advantage of this innovative feature in your smart device to track out your destination, while driving the car. This technology is very helpful to know your Geo-position (latitude and longitude) with the help of your smart gadgets like tablet and smartphone, in case you lose it or get it stolen. In fact, this is a high performance receiver, integrated into a module that is directly attached to your tablet.

The GPS device on your tablet works by connecting to a satellite-based navigation system that consists of a network of satellites orbiting the earth. This technique was first developed for US military applications only; but later on made it available for civil use also. Notably, the GPS equipments works only for the locations where the receiver is efficient to detect signals.

So here in this post, I am going to describe the technical specification and features of some of the tablets that provide you GPS functionality:


Asus VivoTab Smart and Asus VivoTab RT from Asus are the reformed versions of earlier two models - Tablet 810 and Tablet 600 from Asus. Both the devices were unveiled during last year's IFA 2012 event in Berlin. They are packed with GPS, NFC (for fast data sharing) and many other latest technologies. Both the Asus convertible tablets are common in respect to their IPS display with 1,366 x 768 pixels resolution, NFC-ready, 2GB RAM, USB, secondary battery as well as a full dock-able QWERTY keyboard – the central unit that allows devices to transform into a full-fledged notebook PC. But both the devices differ in respect to the types of their operating platforms. 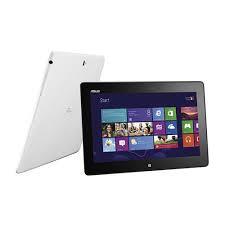 VivoTab Smart is a simple and solid reformed version of Tablet 810 with 9.7mm thick chassis. Its 1.28 pounds weight lets it par with other lightweight contemporary devices including 1.27 pound Acer Iconia W510 and Lenovo ThinkPad Tablet 2 with 1.3 pounds.


The device is available at the price tag of $ 799 including keyboard dock. 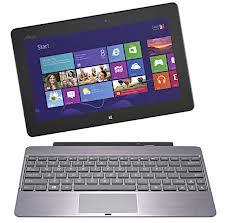 The Window RT version of VivoTab, the reform version of Asus 600 is less expensive as compared to Win 8 VivoTab smart model. The convertible device is designed to pitch more at mobile need of users. It has 8.3mm thick body and just 1.1 pound weight. Its sound quality is appreciable for having SonicMaster powered audio.


Its 10.1 inch SuperIPS multi-touch display is smaller to aforesaid companion but similar screen resolution of 1,366 x 768 pixels. At rear-end, there is 8MP autofocus + LED flash camera and a 2MP webcam at the front. This Win RT based device has access to Metro apps but traditional desktop applications do not run on such ARM powered devices. It is powered up by a 1.4 GHz Nvidia Tegra 3 quad-core processing chip and couples to 2GB RAM just like Microsoft's Surface tablet. It comes loaded with 32GB of internal memory storage. The Tegra 3 CPU easily supports Microsoft's connected standby mode under Windows RT version. Rest of the Global Positioning System, near field communication and connectivity ports are similar to above mentioned companion. 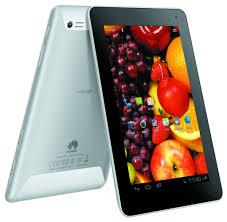 Huawei, the China's leading telecom equipment manufacturer annually ships over 30 million cell phones, around the world. It is also one of the biggest suppliers of tablet PCs and smartphones in global market. This time, they have come up with a new Android based tablet named MediaPad with multi-touch LCD display. This is a lightweight 370gm portable device with physical dimension of 193 x 120 x 11mm and will be available in black/ sliver color options, in the market. The tablet appears great from front to back all around.

The MediaPad from Huawei features a 7-inch multi-touch IPS LCD display with screen resolution of 600 x 1,024 pixels. It runs on Google's Android V4.0 Ice Cream Sandwitch operating system and housing a dual-core 1.2 GHz Cortex-A8 processor coupled to 1GB of RAM. The device also has 8GB of internal storage expandable up to 32GB via a micro SD card slot. There is a 5MP back facing camera with auto focus and geo-tagging where the other one is the front facing camera with 1.3MP.

This Android based gadget comes loaded with a very strong non removable 4100mAh standard Li-Polymer battery that gives you up to 200 hours of standby and 6 hours of talk time backup.


The company has fixed the price of MediaPad tablet for Indian market at Rs 13,700.

Are you looking for a GPS system in India? Sygic is a good GPS app for iPhones. Read further to learn more about my experience with Sygic GPS software in India.

The following resource gives a detailed report on five affordable GPS navigation devices which don't need a SIM card and GPRS access. The cost of these devices lies between Rs. 6,490 to about 16,000.

The Global Positioning System (GPS) is day by day becoming an integral part of our life so far as utility is concerned. Although GPS is available integrally with the all the smart phones today, a GPS device definitely has an edge because of its certain unique features. Keeping this in mind, Tomtom brings another GPS device in the market with a niche of its own.