Steve Jobs left behind a legacy of Apple products which created a group of niche buyers who will buy only Apple products & none other. Living up to the expectations of these loyal buyers is a tough job (no pun intended) for the current designers of Apple products. One of these products is the MacBook Pro. Targeted at professionals who just cannot do without a portable fast working computing device, the Apple MacBook Pro has been doing brisk business.

One of the major features of the Apple MacBook Pro Retina is its trademark Retina Display. Let's understand in simple terms what exactly this means and how it is crucial to the visuals of a computing device.

What is the meaning of Retina Display in computers?

The retina (as you should know whether or not you paid attention in class at school!) is part of the human eye. In fact, it is a very important part of the eye because it is the retina which captures light and helps us to see images. Some images are seen by us with finer details than others. The fineness of the detail is known as the resolution – the higher the resolution, the finer the details.

Now consider this same concept of resolution with regard to computing devices. The resolution of any such device is created by the number of pixels which are incorporated in an image. What on earth are pixels? you may well ask. A pixel is a technical term and a non-technical way to understand it is that it refers to the picture element of an image. All the dots, horizontally as well as vertically, together create the pixels of an image. The combined force of these pixels creates the shades and colours of the image which are displayed to the eye.

Apple thus came up with the name "Retina display" to define the technology it created to provide very crisp images. In fact, Apple has even registered the name 'Retina' as its own trademark. This technology was first introduced in the iPhone 4 mobile device 3 years ago. Since then it has been incorporated in the design of other Apple products such as the Apple iPod Touch and the Apple iPad.

Now while the Retina Display was incorporated in the MacBook Pro, its sibling the MacBook Air never did get it. While we may never know the real reason, it has been hoped that a MacBook Air Retina will see light of day perhaps this year itself.

A MacBook Air Retina will for sure get buyers. After all, as explained above, Retina Display will mean good benefits:

In short, a MacBook Air Retina will do as much wonderful things for the ordinary consumers as the MacBook Pro is doing for the professional buyers.

What about the price? Well, with the added touch of the retina display, naturally you can expect a spurt in the price tag - hopefully not too much! 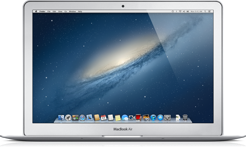 [Image above is of a 13" Apple MacBook Air. Image courtesy: Apple Store]

Rumours swirling out there in e-space speculate that the MacBook Air Retina launch date will be some time in the last quarter of 2013, perhaps well in time before Santa comes calling. Let's hope that's not just a rumour or a myth!

Apple had released its latest product which is known to be 'MacBook Air'. Today in this article I going to give you the complete review of MacBook Air along with its Pros and the Cons. This article will let you know all the details about the specifications of MacBook Air. Read on this article to find out more interesting features about this new product from Apple inc.