Google's Driverless car, may sound like a science fiction novel theme or the bat mobile used by batman. But, it is yet another out-of-the-box invention that Google has come up with, which can transform our lives in a lot of ways. The invention of the car gave us a lot of freedom and independence and changed our outlook in life. And now, the driverless car is going to take another giant step or infact, a giant leap forward. The self-driving car is capable of driving by itself, without the help of a driver. This technology may change the criteria by which you buy a car, people need not consider factors like the engine, the braking system or the fuel used. You can also save so many hours of time in the road stuck in traffic or travelling all around searching for a parking slot.

There are already a number of cars available in the market with a few functions of the autonomous system cars. The functions include adjusting the speed of the vehicle depending on the distance with the adjacent vehicle, assist in maintaining the lane position and also cars that have functions to help in parallel parking. It means that cars with fully automated systems like the Google driverless cars are yet to come. 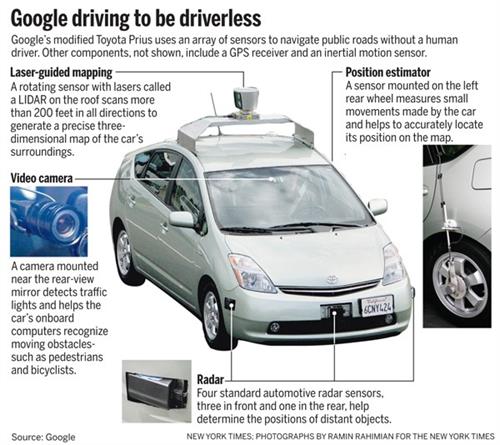 How does the Google Driverless car work

The technology plays the role of the driver. The car can also be pre-programmed with the route to be followed in the GPS system and the speed with which, it should be driven. The software installed on the car calculates the route based on the destination set. The top of the car has a scanner consisting of so many sensors and LASER's (Light amplification by stimulated emission of radiation). It sends out pulses of light to figure out the distance of the objects, it measures the time taken to hit an object and come back. It creates a 3-D map of the environment. Other systems measures the momentum and acceleration of the car around the 3 axis. It uses the GPS (Global Positioning System) along with this, to determine the position of the vehicle. There are video cameras in the vehicle. The Arificial Intelligence (AI) software is connected to all the sensors. This software helps make decisions on controls such as steering, brakes, traffic signals and so on. All the information is processed at incredible speed by the software. This in turn helps control the vehicle speed, braking and other factors very quickly and simultaneously.

The technology involved in driverless cars are RADAR(Radio Detection And Ranging), LIDAR(Laser imaging detection and ranging), GPS, advanced control systems and information from cameras fit to the car. This robotic car can drive very well in public roads, follow the traffic signals, gives way for other cars and also get along with pedestrians, all without a driver. Press a button to go driverless. You can take control of the car by the override function such as turning the steering wheel or just step on the brake.

Advantages and disadvantages of the self-driving car

This revolutionary technology seems to have a lot of advantages. The car will not get tired and hence the chance of accidents is very less. Most importantly, you could get down wherever you want to without the pain of finding a space for your car and parking it. Parking could be done at a very far place and the car could come back when required without any human involved. Thus, you would have a safer and painless travelling experience. It also has a 360 degrees view, which helps figure out what would be going on all around. It would mean that fewer wide roads need to be constructed with this technology, as it improves the traffic congestion. There would be no distractions involved while driving. The response time will be much higher than a driver. The speed limit could be increased and there will be a lot of reliability. Any occupants can use this technology, the minors, old aged, the differently abled and so on. Traffic police intervention would become very less. Accidents will be very much reduced, which were normally caused by drunk driving, fatigue, distractions like drinking water, attending mobile phone calls, text messaging during driving. You can also be alert if the vehicle nearby is out of track and avoid accidents. The fuel consumption will be very less, which in turn helps our environment. So many vehicles out in the road have caused a lot of changes in our environmental condition.

Although there are a vast number of advantages quoted, for every revolutionary technology, there will be huge side effects. The cost will obviously be very high. Also, the response to pedestrians suddenly crossing the road is yet to be seen. The laws governing also needs to be changed. If an accident happens, who will be responsible for it, the technology or the occupant? The thrill in driving will also be no longer there. The car has already traveled 1000's of miles on the roads in the driverless mode, without any accidents. Hopefully, manufacturer's will come up to utilize this amazing technology. So, many prototypes have already been developed by other major companies such as Audi, Toyota, Bosch, Nissan etc.

The self-driving car is another project of Google, where it has to wait for many years for entering the consumer market. They have always promoted projects like the fascinating Google Glasses. The hours saved with this can in turn bring people surf or do more effective work. There is a long way ahead for manufacturer's to implement this technology and bring it to the public for use. The US states, Nevada, California and Florida have already passed laws to allow autonomous cars on the road. Look out in the area for autonomous cars with a cylindrical top going around for test driving. An interesting feature is that the license plates in Nevada for driverless cars will have a red background and an infinity symbol, indicating the CAR OF THE FUTURE.

It is up to us to decide, whether the driverless cars, also called as autonomous or robotic cars is an improvement and not a replacement for humans. I just wonder if the experience in driving will be missed out with this future car out in the roads.

Here in this article I'm going to tell the features of three best gadgets for a car. They are car charger, GPS device and car kit. Read the article and know the features.

Are you looking to buy 2014 Honda Mobilio? Japanese auto giant, Honda is all set to launch its much anticipated low cost MPV- Mobilio next month in India. Read the review to know its features, price, availability and detailed review.

Are you planning to buy the new Audi A8L? Audi has recently launched its new A8L at Rs. 1.11 crore in India. Read the review to find its features and a detailed review.

Thanks to the author for coming up with great details pertaining to the Google driverless car. It is indeed a great advancement of technology that we are able to witness a possible machine replacing human drivers. The greatest advantage this car possesses is that it will lead to less accidents and save human life. With the increasing penchant for driving these days, lots of youngsters drive rashly and cause fatal accidents. I hope this amazing driverless car from Google will lead to several such cars being designed by manufacturers all over the world. And one day there won't be any manually driven cars which would make the pedestrian walkers heave a sigh of relief.