Karbonn Titanium S5 vs Karbonn A21 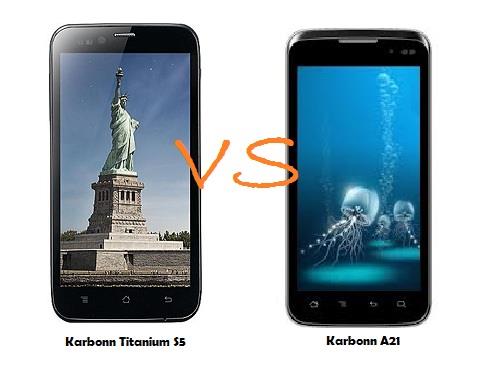 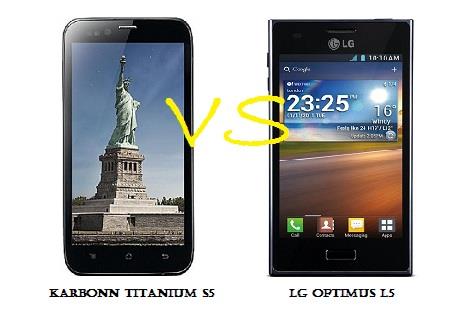 Winner: It is clear from the above data that Karbonn Titanium S5 has not left any chance for LG Optimus L5 to show superiority over it and hence won the another war of the featured comparison. 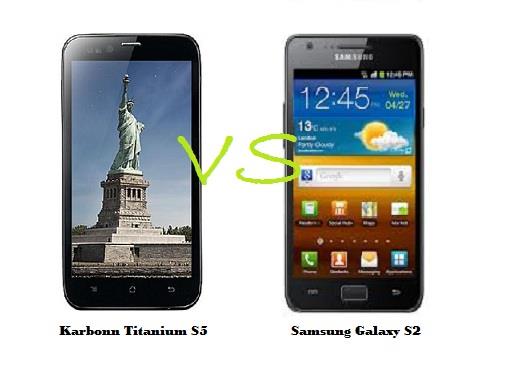 Taking in consideration the features of the cameras, both the mobile phones have same features in this field, i.e. both possess the primary cameras of 8 MP and secondary cameras of 2 MP. The screen size of Karbonn Titanium S5 is 5 inch but Samsung Galaxy S2 has just a 4.3 inch screen with a lower resolution. The internal memory of Galaxy S2 is higher than Karbonn Titanium S5 i.e. 16 GB and both smartphones support the external memory expandable up to 32 GB via micro SD card slot. The connectivity features in both the smartphones are same i.e. Bluetooth, WiFi, GPS and much more. In the field of battery backup, Samsung Galaxy S2 holds the stronger side by providing a backup of 9 hours of talk time and about 700 hours of standby. So from the above data, we can judge that both smartphones should cover the same price range i.e. around Rs 12,000 but the price of Galaxy S2 is more than double that of Karbonn Titanium S5 i.e. Samsung S2 has a price tag of about Rs 25.500in the Indian market.

Winner: Both the smartphones had a great fight but ultimately the winner is only one and here it is also the Karbonn Titanium S5 who has not left the place foe Galaxy S2 to be in the stronger side.

By the above data regarding the comparison of different smartphones with the Karbonn Titanium S5, I have judged my first line statement that Karbonn Titanium S5 is turning to be tough competitor for all the Android smartphones of its range as well as some higher ones too. Karbonn Titanium S5 has really raised the level and rank of the Karbonn brand to a great extent. It has also proved itself a gift to the Karbonn fans as well as Android lovers by providing the best possible services at a reasonable cost of Rs 11,990 to make it an affordable smartphone among the tough competitors. I tried my level best to bring forth all the possible information which is enough to help you select the best among the above mentioned smartphones. If you need any further help, you can post your query below in the form of comments in response to this resource.

Its a good comparison and writer has done well in describing the positive & negative points of each mobile.

No doubt that, Karbon will emerge as a prime player in the Indian mobile market after the launch of Titanium S5.

I would like to know the picure quality & the SAR (radiation) value of this hand set in comparison to the Samsung & LG phones.

I am going to have this phone to-day

@AG Sawant,
The picture quality of the Karbonn Titanium S5 is higher (3468 x 2446 pixels) than that of the other two smartphones from Samsung and LG and the SAR radiation value is almost same in all the above 3 smartphones i.e. 0.8 kg/w approximately.

@Umashankar Verma,
Best of luck for the experience with Titanium S5.

@Syed
Its a good phone. I would like to buy this phone.

I would advice you to work on the quality of the mobiles as well so that we could get an Idia how good the handsets will Perform.
Please cover the below points in terms of Quality and not quantity.
1.Display (PPI)and (Screen Type)
2.Processor (Speed),(Company) and (Performance rating)
3.RAM (Speed) and (Company)
4.Operating System (Version and Updates)
5.Camera (MP) and (Quality of Pic and Video)
6.Battery (Backup and talktime)
7.Hardwares used

Please don't buy Karbonn mobiles. They don't have a customer care response. No response on call center number. No one to solve queries. Disgusting. I am very annoyed.