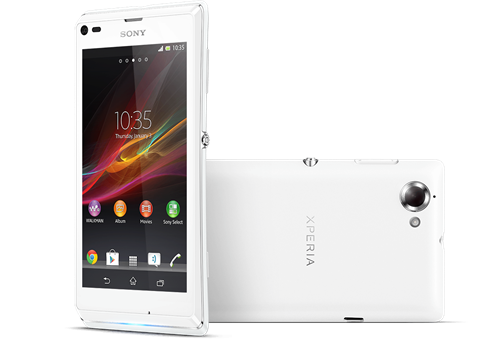 Leading global tech manufacturer, Sony Mobile Communications is getting ready to rock the world with a brand new smartphone adding one more to its Xperia range of premium smartphones. After going through hard time for the last two years, the tech giant has overcome the past experience with entry-level and mid-range smartphones with attractive features and comfortable price.

After launching Xperia U and Xperia P in 2012, Sony is gearing up to give an outstanding experience for the users with Xperia L offering a handful of features. Through Sony's media applications, customers can enjoy online and offline content like music and movies. One can browse through over 18 million songs while selection can be made from 100,000 movies.

An 8MP rear camera along with autofocus and Exmor RS technology and a VGA front facing shooter exclusively for making video calls are being added. 8GB memory can serve as a power house to store photos and videos which can be further expanded up to 32GB using a microSD card. The connectivity features of Xperia L include Wi-Fi, Bluetooth, GPS with A-GPS, GLONASS and NFC. A 1750mAh battery enabled in the phone offer 498 hours of standby time and 8.5 hours of talk time. To be available in white, red and black colour variants, the Sony Xperia L is a good example of novelty and engineering proficiency of Sony.


The Sony Xperia L would be made available around the globe during Q2 2013. As there is no official word regarding the price of this smartphone, speculations mound up among tech insiders. It is predicted that, the Sony Xperia L would cost around Rs 20,000 while it reach the shores of India. Like other Sony series phones, the Xperia L too can be bought from Sony's official e-stores and other popular online stores.