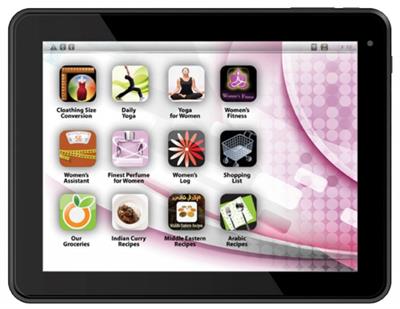 The sales of tablet computers have grew up to 29% in 2012, forecasting the number to be 172.4m - 190.9m in 2013. With 46% of growth in the sales of tablets and smartphones, it is also estimated that the total shipment will be 353 million by 2017. As the demand for tablets are enormously increasing, more manufacturers are on the move for introducing their products.

As there are too many tablets in the market, customers do wish to own a device which stands apart from the normal category. Adding one more to the line, Eurostar Group traditionally known for developing digital satellite TV has introduced the EPad Femme exclusively designed for today's women.

Announced in October 2012, the tablet which had received respectful response from the customers being 'the perfect Valentine's Day gift', is back in business with ePad Femme pre-loaded with apps relating to yoga, grocery shopping and cooking. The device which is packed completely in pinkified skin has already reached the hands of 7,000 happy customers. Catered for women with diverse interests, the EPad Femme would add much comfortable to their lifestyle.

The ePad Femme tablet spots an eight-inch (20cm) with HD display screen. Powered by a 1.5GHz processor, the Femme runs on Android 4.0 Ice Cream Sandwich OS. Regading the internal storage, 16GB memory is being equipped which can be expanded using a microSD card. Wi-Fi and an internet USB connection would serve as companion to transfer data.

The pre installed applications would be much helpful in times of quick reference. Eurostar has included 1,500 games to keep the children and teenager 'gamers' intact. With its highly sensitive 8 inch capacitive screen, users can enjoy movies and TV shows without any break.

The ePad Femme Tablet which is priced at Dh 599 ($ 190) is currently available at leading retail outlets supported by Eurostar through its 100 dealers, hypermarkets and various corporate channel partners. Being a unique product, the sales on ePad Femme is climbing up with more customers interested to own it.