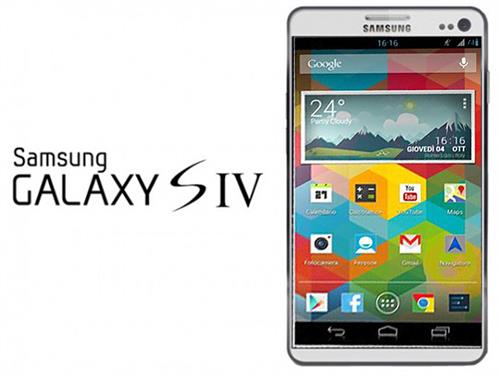 Yesterday Samsung the Smart phone giant has announced its most ambitious smartphone, the Galaxy s4. It is interesting to note that Samsung launches S4 in the Apple homeland itself. This is a straight blow to Apple , a declaration from Samsung that after all the law suites Apple filed against them are not enough. Anyway we all know that the US people love Apple and iphone more than any brand, so we have to wait and watch to know how this will turn out to be in the end.

Let's take a quick look at the specifications of Galaxy s4, we have a beautiful 5-inch full HD Super AMOLED; 1920×1080 display (441 ppi). S4 got an internal storage range varying from 16 to 64 GB and if you are looking for more you can plug in a MicroSD card to extent memory up to another 64GB. The phone has a mega-battery even if Samsung didn't say how long the battery will last, it is 2,600 mAh battery and has a lot more life than its competitors. But here we got an 8 core processor and much powerful GPU. Don't forget the bright full HD display which is going to drain at least 70% of the battery.

Yes, we all know how powerful was Galaxy s3, now we have a newcomer who has to be more powerful than s3. Hence Galaxy s4 has all up to date android technologies and specification. But that is not enough to call Samsung Galaxy s4 as an amazing smart phone as compared to other smart phones in the market like >a href="/articles/HTC-Butterfly.aspx">HTC butterfly. So what is that WOW! factor that we are looking for in each and every Galaxy S release. Here are the 10 top most features of Samsung galaxy s4.

1) You can use both the cameras at the same time.
It may not sound a lot to most of you people but its there, first in all smart phones. Samsung galaxy s4 has two cameras , the primary camera is 13 MP, 4128 x 3096 pixels, auto focusing, LED flash (More Features: Dual Shot, Simultaneous HD video and image recording, Geo-tagging, touch focus, face and smile detection, image stabilization, HDR) and secondary camera comes with 2mp. You can simultaneously shoot with the front and rear cameras. When capturing moments, users can choose from a variety of frame effects which blend the two pictures naturally and also adjust the size of the small picture inside the big one. Users can select 8 different ways to combine two photos taken by the front camera and the rear camera.

4) Record little sound with image
This a new unique feature that allows user to record a few seconds of audio before you capture an image. In this way, you can enrich any picture by adding background sounds for a few seconds.

5) DRAMA Shot and Tons of new photo features
Samsung Galaxy s4 comes with tones of new and existing photo filters and effects, S4 have new features like drama shots etc. It lets you take a series of pictures of a moving subject, and merge them into one picture. Thus, it allows you to see all the action in one continuous time-lapse.

6)Smart scroll by head tracking
The techniue helps Samsung-Galaxy-S4 scroll the web pages or emails applications up and down itself by tracking users head movements. Galaxy s4's front camera recognizes position and movement of your wrist and then scroll the pages up or down accordingly.

7) Air View/Air Gesture allow you navigate without touching the screen
Air View allows users to hover with their fingers to preview the content of an email, S Planner, image gallery or video without having to open it. Though the feature is present in the Galaxy Note II, but in Galaxy Note II Air View allows a user to preview content by hovering the S Pen (not finger) over the content. With Air Gesture, you can change the music track, scroll up and down a web page, or accept a call with a wave of your hand. Air Gesture in the Galaxy S4 allows users to navigate the phone without actually touching it.

8) Group Play
You can enjoy music, photos, documents and games with those around you without any wireless access point or cellular signal. Samsung-Galaxy-S4 enables users to connect directly with others to share, play and co-create contents and join entertainment instantly. Its 'Share Music option' allows users to have the same song playing on multiple phones in sync to create the best party atmosphere.

9)Come with health tracking app
You can track your workouts, daily intake and weight, and monitor your blood pressure, and blood glucose levels with the apps present in Samsung-Galaxy-S4 .

10)Loaded up with Android 4.2.2,
Samsung Galaxy s4 comes with android 4.2.2 along with Samsung touch utility which makes it amazingly smooth and responding. This will be the most up to dated phone that you can find in present market.

Samsung galaxy s4 comes with almost all that you can get in a smart phone. It has HDR video recording, dual camera recording and fastest SOC with 8cores. Hence it is truly the most amazing and most expected phone of all time.