In this world of Information and Technology, every individual or organization or nation wants their data to be kept secured when they deal with data transmission. But due to various hacking activities by smart hackers, they cannot not keep their data secret. The hackers hack the data and misuse it in any way for their benefits like criminal and terrorist activities. They decode the data easily by hacking. To deal with this issue, three American scientists developed a new smart algorithm to do encryption and decryption of data which are required to be secret. They are namely Whitfeld Defi, Martin Hellmann, and Ralph Mercell. They revolutionized the digital data field and eventually, we are now getting secure data.

What is data encryption?

It is a process to code the ordinary data secretly with some pre-determined pattern of alteration of digits of data. That pre-determined pattern is called KEY. The data encryption is done in binary form i.e. in the form of 0 or 1. But to keep the data secret, data encryption is done by KEY. If this KEY is available or known to the counterpart, the decryption of data can be easily done. Let us see the example of how the word, "HELLO" is encrypted by a KEY. All the letters of HELLO are first converted to their corresponding ASCII (American Standard Code for Information Interchange) or binary form. Thus HELLO text is now converted into digital or binary form like "1001000 1000101 1001100 1001100 1001111". If this data or word is sent to another party, the hackers can also easily understand the meaning of this binary form. Instead of sending it in a simple form, encryption is done by KEY. The KEY is nothing but an alteration of the digits in a pre-determined pattern. This pattern is KEY. Let us see a KEY that tells every third digit is replaced by its next digit. HELLO in binary form is totally changed to some irregular form and its meaning will be totally changed when converted to original text form and thus the data will not be understood by the hackers. But if he/she knows the KEY or he/she knows that every third digit is replaced by its next digit, he/she will do the reverse and decode the data or data decryption can be done easily. So, the KEY changing process is done very smartly. Let us understand the following example.

Let us understand the the concept of KEY recognition by counter party, by an example or a story, 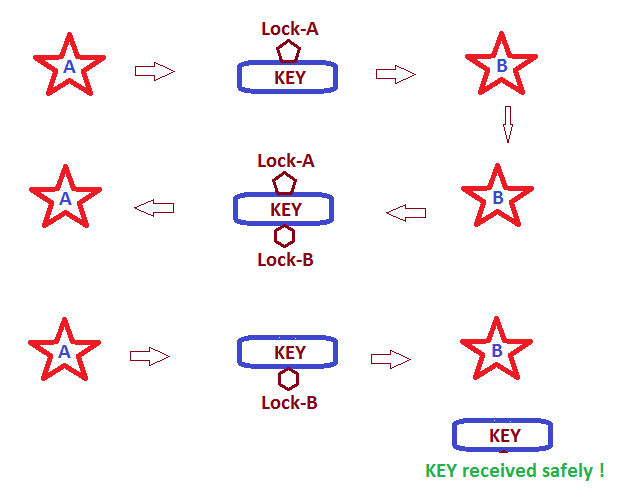 Suppose in a certain region, Mr. A wants to send his secret data via KEY to Mr. B located elsewhere. But due to hacking or attack of hackers, he does not want to use the conventional method to send the data along with KEY. Instead of normal sending, he sends the KEY in a small wooden box with a letter containing the KEY. Then he locks the wooden box with 'key' (key of Lock not of encryption) and keeps the key with him. Now the wooden box is sent to Mr. B safely due to lock attached with the box. But Mr. B is not having the 'key'! He now does the trick. He put the second lock with the wooden box and send it to Mr. A. It also reached safely to Mr. A due to two lock attached with it! Now Mr. A unlocks his box with his 'key' and re-send the box to Mr. B and now finally Mr. B unlocks the box with his own 'key'. Thus the KEY mentioned in the letter, sent by Mr. A reached safely to Mr. B without damage done by hacking activities. Thus, in this manner, data is kept secret with encryption and decryption by a KEY.

BlacBerry do the same thing. It does all these KEY changing tasks via Blackberry Server and it acts as a mediator between two Blackberry mobile/handset taking part in a conversation or data transmission. Thus, there was a conflict between India and Blackberry to set up servers in India.

Read the review of the internet data encryption software: Hotspot Shield which provides encryption service, VPN and a lot more. Know how to install it and the features it has on offer.

How to Encrypt Personal Data on Windows for free?

The current trends have been towards safeguarding your personal data on your devices. With the increased cases of data breaches through hacking and similar other factors, it is essential to encrypt your data. Encryption of the data will ensure that your data stays secure from the reach of cybercriminals.

How to Encrypt Personal Data for free on Android?

Keeping your personal data secure is indeed the need of the hour these days. Whether on your smartphone or computer, encryption is the best option that can be helpful in handling your personal data is of utmost importance. You may be using encryption on your Windows or Mac systems already, but have you ever given a thought to encrypt your Android device? We will guide you on how you can achieve it.

Searching for a safe place to store your precious photos, videos, songs, movies or softwares? Want a portable and fast data storage device? Stop your search right here because in this article we bring you the fastest 1TB external USB 3.0 hard drives.