Sony has brought an exciting news about Sony Xperia Tablet Z hitting the stores of India in the month of May. Sources state that the tablet resembles the same design as that of its sibling smartphone Sony Xperia Z. This tablet has a unique feature namely Omni Balance design which makes the device portable and easy to handle. Japanese tech giant Sony unveiled a 10.1-inch tablet, the Xperia Tablet Z, at Mobile World Congress in Barcelona. The tablet runs on Google's Android operating system. The Tablet Z was first potrayed in Japan following CES and it was launched recently in the US after being announced at MWC. Sony ventured into the tablet arena with the Android-based Tablet P and Tablet S that came to India in December 2011. The company brought out Xperia Tablet S in August last year and began selling its latest Android tablet on September 7 in the United States followed by launches in Japan, Europe and elsewhere. Sony Xperia Tablet Z is soon going to be the talk of the town with its replenishing features. 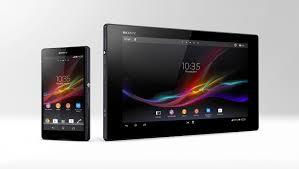 Sony Xperia's trademark is complimented well with the HD screen enabled in the Sony Tablet Z. The 10.1 inch display is powered by Mobile Bravia Engine which provides added enhancement to the handset and improves its quality. The display is of high quality TFT type which promises for good quality in displaying clarity pictures instantaneously. Speculations reveal that the handset would come with an OptiContrast panel which provides a clear view in bright light conditions as well as creating a seamless black surface when the tablet is turned off. At just 6.9mm thickness and weighing 495 grams, Xperia Tablet Z is light for a 10.1" tablet. Despite its sleek design, the tablet looks sturdy and boasts of good build quality. The phone is expected to feature a 4G LTE support.

This ultra-light Android tablet is water-resistant, with a super-strong glass display. Sony claims that Xperia Z Tablet can remain in water for up to 30 minutes and can even withstand water jets without any harm being caused to the tablet. The front panel is made of durable tampered glass, with anti-shatter film. Sony has also incorporated its proprietary S-Force virtual Surround sound technology in the tablet for enhanced audio quality. It has four speakers and Clear Audio for richer sound that's closer to the real-world experience and highly pleasing to the ears. The speakers are claimed to be of stereo type and capable of providing 3D sound enhancement. The handset would be available in black and white colors with rich looks. It's running on Android 4.1 Jelly Bean operating system. Sony Xperia Tablet Z provides many outstanding features like WUXGA Capacitive Touch screen Display, Video Calling, 2G / 3G Support etc.

At just 0.27 inches thickness, Sony Xperia Tablet Z is slimmer than the iPad Mini which is 0.29 inches thick. This has made the Sony Retailers to tag Xperia Z as the slimmest handset ever launched. Also the device would not be susceptible to any kind of damage with its shock proof, water resistant and dust resistant features. Sony Xperia Tablet Z is a gracious tablet with all its versatile features.

Display
The display constitutes of a 10.1 inch screen with a resolution of 1920x1200. The interface runs on Sony's Mobile Bravia Engine 2, the image quality enhancement engine for photos and videos that largely improve the display quality and will be delightful for gaming.

Processor & RAM
The Xperia Tablet Z is built with the 1.5 GHz APQ8064 quad-core Snapdragon S4 Pro processor with 2GB of RAM that allows fast access and improves multi tasking with a promised battery life. It also helps the users to run multiple applications simultaneously without any downtime. Graphics are powered by an Adreno 320 GPU.

Operating System
The prestigious device runs on a well featured Android 4.1 Operating System Jelly Bean which is yet to be upgraded to 4.2 version. The Software provides a very good user interface with applications like Facebook , media playback and other innovative apps.

The battery is durable providing a standby time up to 1230 h for 2G and up to 1270 h for 3G. The talk time offered reaches 10 hours for multimedia and music is capable of playing full-fledged up to 11 hours.

Memory
Sony Xperia Tablet Z holds a microSD card slot with a memory of 64GB. The internal memory sustains up to 16 GB and there is a 2 GB RAM enabled in it. The tablet supports GPRS that operates at 107 kbps and EDGE at 296 kbps.

Connectivity
Sony Xperia Tablet Z offers extensive support to Wi-Fi as well as Wi-Fi 4G variants. Other Connectivity features include NFC (Near Field Communication), 2G, 3G, Bluetooth 4.0 and micro USB 2.0. NFC allows users to interconnect devices without the use of any cable or wire or enhanced settings. MHC cable when plugged in with the device provides a very good view of the Tablet in TV, thus serving as a very good recreation to the users to watch all stuff like films, games and many more.

Xperia Tablet Z has LTE connectivity and support for Cat3 LTE, which provokes maximized download speeds at the rate of 100Mbps on 4G networks. It also has support for HSPA in addition to GPRS and EDGE. As far as Wi-Fi connectivity is concerned, the tablet supports dual-band Wi-Fi 802.11 a/b/g/n bands.

Although the handset has been released in Japan, manufacturers have not revealed the release dates in India. The price might vary from one dealer to another. The Tablet Z with Wi-Fi only will cost £399 and the 4G model will cost £499.

The Sony Xperia Tablet Z from the Japanese manufacturer is expected to hit the market soon with its dashing features and specifications. People have to wait to see how the tablet establishes itself among so many competitors and becomes an iconic model.