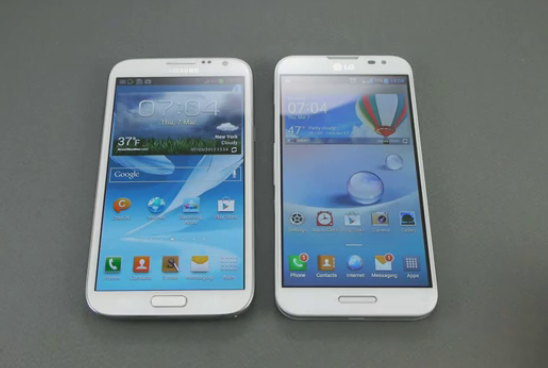 Both are similar in physical appearance. One can hardly differentiate between the two on the very first look. The only difference I could notice was, LG Optimus G Pro houses a narrow home button in the bottom, while Samsung houses a wider one. LG is lighter than the Samsung's Galaxy Note II. 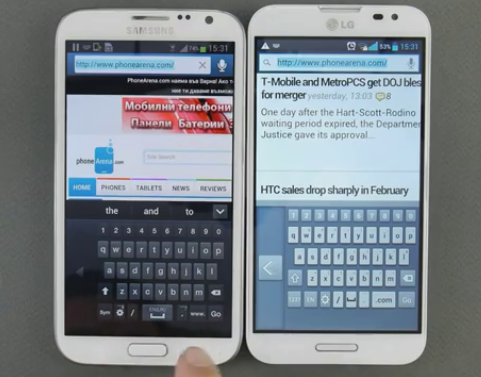 The Note-II houses a Exynos 4412 Quad-core 1.6 GHz Cortex A9 processor with Mali-400 GPU, whereas LG Optimus G Pro houses a Qualcomm Snapdragon 600 Quad-core 1.7 GHZ Krait 300 processor with Adreno 320 GPU. Both the handsets are powered by Android Jelly Bean.
LG Optimus G Pro in addition to above specs also houses:
1. TV remote controller (IR blaster).
2. Physical Q Button in the left side of handset which one can map to any application so as to launch it at a single click.

User Interface in both the handsets are pretty simple. On the very first look both appeared same. LG provides Full Landscape mode which Note-II doesn't.


The S-Pen in Note-II adds a lot of mind boggling functionalities to the phone. The S-Pen is easy to use and has a nice handwriting recognition tool. One can even write using fingers. No such stylus is available in Optimus G Pro. Both handsets have keyboards which is similar in appearance. One can shrink the keyboards from left to right in both of them. 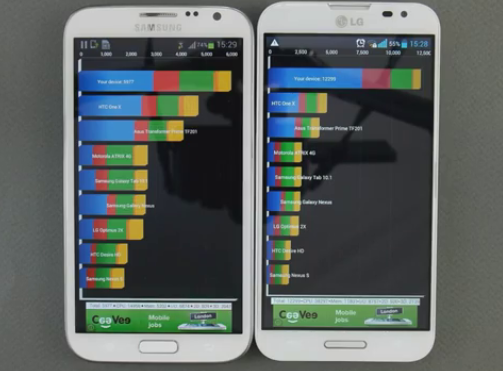 Note-II splits the screen into two. The photo structure resides on the left part and the content of the gallery on the right.
Optimus G Pro on the other hand offers thumbnail zoom function. It scales the thumbnails by pinching with your fingers.

LG offers 13 Megapixel camera on the rear whereas on the other hand Samsung Galaxy Note-II offers a mere 8 Megapixel. Both phones offer HDR shots. Both phones capture 1080p videos at 30 fps without any skipped frames.
But LG also offers dual recording Mode in which both the cameras function simultaneously. With Dual Recording Mode, one can record with both the camera at a single click. LG offers well defined and vibrant photos in comparison to Note II.

To sum it up, better specifications and more compact design of LG Optimus G Pro might actually attract people looking for giant phones without any S-Pen. The addition of Q- button on the left and IR blaster on the top makes it more attractive. I personally feel LG Optimus G Pro would be handy to buy.