BlackBerry is one of the most reputed mobile phone manufacturing companies in the world. It has always proved itself the best in manufacturing the mobile phones for corporates. BlackBerry has put forward an all new cell phone full of features and specifications to compete with other smartphones like Apple iPhone 4s or Samsung Galaxy SIII and the phone is none other than the BlackBerry Z10. This newly launched smartphone is really a full packet of modern features and specifications. Here is the list of the features loaded in the BlackBerry Z10. 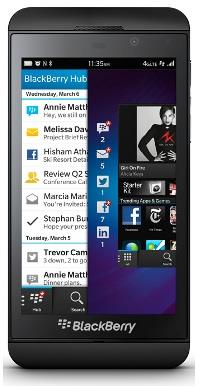 Features and specifications of BlackBerry Z10

Sound
Alert types: Vibration, MP3 ringtones
Loudspeaker: Yes
3.5mm jack: Yes
It is preloaded with the alert messages of the mp3 format which can be transferred to other phones also. It also has the facility of loudspeaker and also uses the 3.5mm jack for the headphones.

Memory
Card slot: microSD, up to 64 GB
Internal: 16 GB storage, 2 GB RAM
According to me, there is no need of using the external memory support because the internal memory is enough to store the data for our daily use. So, this is really one of the unique features of the BlackBerry Z10.

By observing the preloaded apps in the BlackBerry Z10, it can be predicted that this smartphone has a professional touch and thus, is best for the folks at work in offices, businessmen etc. BlackBerry Z10 is also fit for gaming and other entertaining sources. So, it is fit for youngsters also.

The battery backup of BlackBerry Z10 is about 10 hours of talk time and about 300 hours in stand-by mode which is really amazing. So, you can enjoy the maximum moments of your daily life with the BlackBerry Z10 taking advantage of all the features and specifications of it.

This was all about the features, specifications, ratings and price of BlackBerry Z10, a new revolutionary smartphone from BlackBerry. If you find any missing or incomplete information regarding this smartphone in this article, please feel free to contact me through the responses below. Also, if you have bought the BlackBerry Z10, then please review it below in the comments to help the readers to choose the best for them.

Get more details of BlackBerry Z10.