Ever since the launch of iTunes and App Store, consumers seem to pay a lot of attention while picking the best of utility related applications in comparison to games. What do you think is the reason behind this? Games are very easy to be identified but when it comes to utility related applications it is absolutely hard to find out the best app that suit your needs. Eventually as people get to know some of the apps related to utility they suggest it to others and that is how we find the pearl out of hidden rocks.

To reduce your efforts in hunting for a good utility app, Techulator would like to suggest you a utility app – Memory Mate Pro for your iPhone and iPad. We strongly recommend that Memory Mate Pro can absolutely take up a place in the must-have-apps of iPhone's and iPad's.

Suggested: An exhaustive comparison between Android, iOS and Windows OS

What does a Memory Mate Pro do?

It is a powerful utility that is capable of managing memory in a very flexible and smarter way when compared to most of the apps. That being said, the major plus turns out to be the intuitive way and the know-how ability incorporated to reload memory state.

What are the outputs of a Memory Mate Pro App?

Once you launch this app, you clearly get an observation of the free memory available. Take a look at the screenshot below. The Reload Stats button helps the iPhone or iPad to eliminate the wastage of the memory and restores it in just one tap. What more do you expect from an app than letting your device's RAM to be utilized for genuine purposes through restoration in a single tap?

What are the observations shown by Memory Stats pertaining to the usage of RAM?

Although we run various applications, sometimes when the performance is slow we aren't aware of the other applications running in the background until or unless we do a background check. Your efforts are filtered and lessened again for Memory Mate Pro has the in-built capability to list out the Free Memory, Active Memory, Inactive Memory and Wired Memory of the RAM. You must be pretty clear about the RAM usage available for you to run the applications in your device (RAM usage available refers to the Free memory listed). You can take a look at the screenshot below for the same. 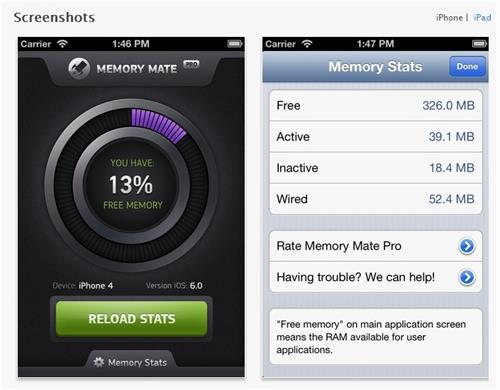 What are the requirements to download Memory Mate Pro?

Memory Mate Pro is compatible with iPhone, iPod touch and iPad. iOS 4.3 or above would suffice to download.

What is the price of Memory Mate Pro?

The size of Memory Mate Pro Version 1.0 is 6.5 MB and the application is categorized under utilities. Memory Mate Pro is available for $0.99 in App Store for download and you can also view it in iTunes as seen below. 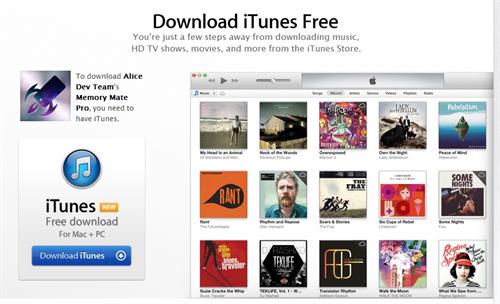 Memory Mate Pro was developed by Alice Dev Team, an emerging leader in Mac software and services. Download the application, utilize the abilities under its hood and if you are satisfied do not forget to rate the application as it is absolutely necessary for everyone to know about this powerful utility app.

Let us take a moment to dedicate our best wishes to Stanislav Kupstov, CEO of Alice Dev Team and Alice Dev Team developers for Memory Mate Pro to come out in flying colors.

Are you searching for iTunes apps to make your time more productive, help you make you skills yield more results by managing the small tasks for you? Then read this article for the top productive apps that you should go for for your professional life

Have you bought one of the expensive Apple devices like the iPhone and iPad and are already worried about its safety? Worry not, here we have the best iTunes apps to help you track you iPhone or iPad in case it is stolen or is lost

Best and cheap TV Apps for your iPad and iPhone

Do you know about new free apps on the Apple iPhone? This article includes about Apple Inc, the history of Apple iPhone series and detail about 10 new apps in 2013 on Apple iPhone.