Idea Cellular is back on the competitive track through the introduction of Zeal, a Dual SIM Android smartphone that runs on the outdated Android 2.3.6 Gingerbread Operating System. Although the device runs on Gingerbread OS, the combination of 1 GHz Qualcomm processor and 256 MB RAM is quite a fair combo provisioned that is capable of running the applications smoothly. 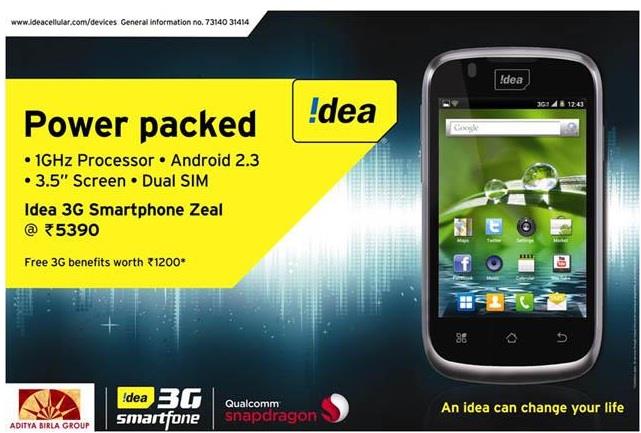 The screen size is of 3.5 inch with a resolution of (320 X 450) pixels. Unfortunately, internal storage is only 512 MB. However, it can be expanded via microSD upto 32 GB. Surprisingly a 4 GB data card is also included.

There is a primary shooter of 3 MP but there is no secondary camera provisioned. Connectivity options range from 3G, 2G, Wi-Fi, Bluetooth, microUSBv2.0 and A-GPS support. The Idea Zeal smartphone is also provisioned with FM Radio support.

Idea Zeal is specifically targeted towards youth community who likes to stay connected all day. The company's aim to manufacture smartphones with 3G facility at affordable prices continues to be a success in the rural and semi-urban markets.

Attractive data usages have been offered by Idea for all 3G users along with the purchase of Idea Zeal. Post the purchase of this device, when you recharge for Rs 261, you get a free usage of 1 GB 3G data for first 3 months (every month) along with a free subscription of Idea TV for 3 months.

Here is a quick rundown of the key specifications of the Idea Zeal Android Smartphone: 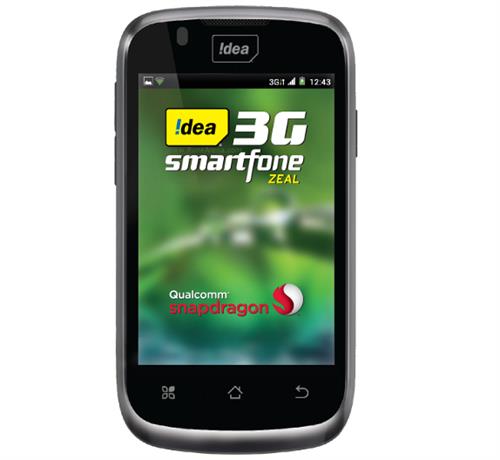 The Idea Zeal Android Smartphone is priced at Rs 5,390 which is a considerate price as compared to the features provisioned. However, the device would have bagged more interests if the OS had been ICS or JB. That is being said that Idea Zeal, specifically targeted towards consumers to enjoy 3G at affordable rates, will unequivocally serve its purpose.

Share your comments on Idea Zeal Android smartphone if any.