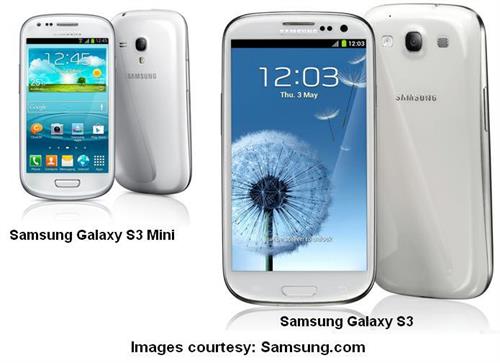 Samsung's little genie Galaxy S3 Mini runs on Google's latest Android v 4.1 Jelly Bean operating system. It is pertinent to note that Jelly Bean operating system has been installed in mid-range phone perhaps for the first time. The obvious purpose of Samsung doing this might be to beat the competition in the mid-range phones. Samsung has supported the system with the company's home-made Nature UX perhaps to justify its little higher price tag of around Rs.18,000 which is just Rs.10,000 less than its top selling big brother Samsung Galaxy S3. The big version Samsung Galaxy S3 runs on Android 4.0 (Ice Cream Sandwich). However the good news for Samsung Galaxy S3 owners is that Android v4.1 (Jelly Bean) OS update is available for this smartphone may be with further update to even v4.2. Both the smartphones use Samsung's TouchWiz user interface.

How are Galaxy S3 Mini and Galaxy S3 smartphones powered?

Samsung Galaxy S3 Mini's power has been reduced to half with its modest 1 GHz dual core processor from the powerful Exynos 4 Quad core 1.4 GHz processor of Samsung Galaxy S3. Quite obviously the power has to be compromised with lowered price of Galaxy S3 Mini. The fast and powerful processor of Galaxy S3 makes multi-tasking easy and improves the response time. Both the smartphones have 1 GB RAM. In respect of RAM S3 Mini scores over S3 because of the same memory but a smaller size and less power.

Comparison of cameras in S3 Mini and S3

Connectivity features of the two smartphones

Comparison of battery features of the two smartphones

It will be quite apt to state that the buyers who find the Galaxy S3 very large in size and very expensive might opt for Galaxy S3 Mini due to its smaller size and less cost. Of course, the screen is not very much small since the difference between the sizes of the two phones is only 0.8 inches. If you can compromise on some of the downgraded features of Samsung Galaxy S3 Mini, you may feel pleased to buy this budget smartphone.

Thanks a lot i had a headache to figure things out .. and this article solved everything for me
Great work done .

Thanks a lot, Amit for your appreciation of the work.