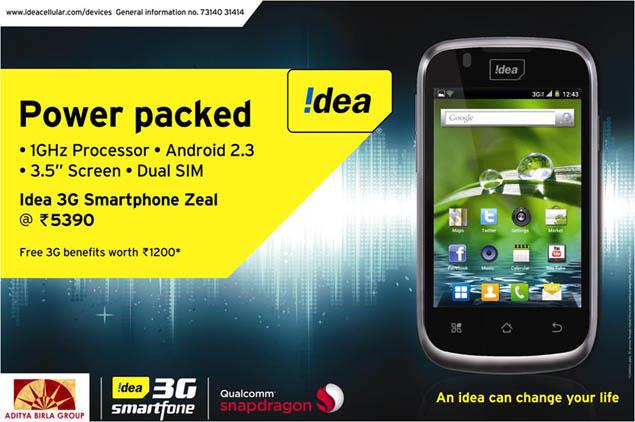 Idea Cellular, the 3rd largest mobile operator in the country, had been focusing on the development of 3G in India creating an atmosphere which could provide better network coverage and customer service across the country. To enhance the service experience for the user, Idea has introduced the all new 'Zeal', the fifth smartphone from the company.

The Idea Zeal is a dual SIM Android smartphone, which supports 3G connectivity and is pre loaded with apps including Facebook, Twitter, Orkut, Youtube, and Idea TV. The Zeal smartphone is targeted at the youth generation which includes college students and professionals, who wish to stay connected to social networking sites while on the move.

The Idea Zeal spots a 3.5-inch touchscreen display with 320X480 pixels resolution. Powered by a 1GHz Qualcomm Snapdragon Processor, the smartphone will run on Android 2.3.6 (Gingerbread) OS. The Zeal comes with a 3MP auto-focus rear camera but lacks a front facing camera. Regarding memory, the phone has 256 MB of RAM, 512 MB ROM and a MicroSD card slot which is compatible for cards up to 32GB. For connectivity, Wi-Fi, A-GPS, Bluetooth and 3G would serve as a companion to transfer data.

Adding more colours to the launch of Zeal, the company provides attractive data usage offer for 2G users, who are interested to own the smartphone. Along with the 'Zeal', the consumer will get a free data pack of Rs.261 with 1GB of free data usage every month, for first 3 months subscription of Idea TV. The Idea Zeal is packed with a 1300 mAh battery, which can run the device for few hours without interruption.

Already 3G Android smartphones named Idea Ivory, Idea Aurus, ID 918 and Idea Blade are riding in the Indian market which comes at a price range between Rs.5,390 to Rs.7,992.


The feature rich dual-SIM Idea Zeal 3G smartphone will be available for Rs.5,390 at all popular mobile retail stores and Idea outlets across the state. This device would make the customers happy, being one of the very few low-cost devices in market to feature 3G connectivity which comes under a less price tag. Being a budget smartphone, the outdated Android v2.3 Ginger Bread OS would be a drawback as most of the devices available in the market have moved to Ice Cream Sandwich OS. But, if dropping the mobile OS, the Idea Zeal would be a decent entry in the market.