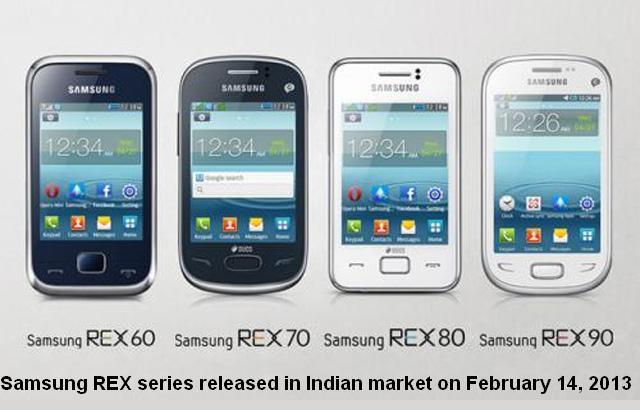 Last month, Samsung, the Korean home appliances and electronic devices manufacturing giant, launched four phones with smart features in REX series. All the smartphones launched on February 14, 2013 are dual SIM phones. The models of these smartphones are named REX 60, REX 70, REX 80 and REX90. Feeling the pulse of the people in India who prefer to buy low cost phones with good smartphone features, Samsung priced the REX series to cost from Rs. 4,280 to Rs.6,490. The Rex series of phones are provided with a feature which enables the standby SIM to receive calls in the call waiting mode, while the user is busy in call received through the primary SIM. The two models REX 70 and REX 90 has the true 'hot swap' feature for their SIM cards. Obviously, there is no need for the user to restart the phone because of this swapping feature. There is no 3G connectivity in any of these models. However, the models REX 80 and REX 90 have the Wi-Fi connectivity. Samsung claims that these smartphones have been developed locally in India and will be introduced to other growing markets from here.

The REX series of smartphones from Samsung use the company's own phone OS that features Samsung's Touchwiz user interface. It will be pertinent to note that Samsung has integrated the same user interface (UI) in its Galaxy range of Android phones with high end features. All these smartphones support Java apps. Social networking features like Facebook, Twitter, ChatOn, Google Talk and other messaging and social apps come preloaded in the REX series of phones. There is FM radio tuner in all the REX phones. FM recording support is available in all the phones in REX series.

Having known breifly about the features of the four smartphones REX 60, REX 70, REX 80 and REX 90, let us now proceed to put them side by side to compare their features, specifications and prices in detail for the buyer to select them according to their choice. 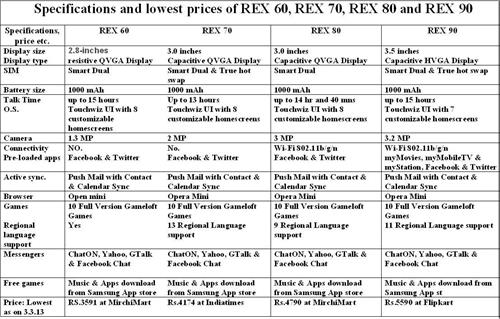 Though the prices announced by Samsung at the time of release of its four REX series phones on February 14, 2013, ranged between Rs.4,280 and Rs.6,490, the search made at Google yielded the result that the lowest price quoted for Samsung REX 60 was Rs.3,591 at MirchiMart online shop. Similarly the lowest price quoted for REX 70 was Rs,4,174 at Indiatimes.shopping, for REX 80, it was Rs.4,790 at MirchiMart and for Rex 90, the lowest price quoted was Rs.5,590 at Indiatimes.shopping and Flipkart. These were the prices displayed at Sulekha.com as on March 3, 2013. The comparative specifications and lowest prices given in the attached chart will help the buyers to make a right choice before buying any of these budget smartphones from Samsung. In case, the buyers make their decision to purchase a phone after April 1, 2013, they have to pay the increased excise duty of 5% announced in the Indian budget proposals by the Finance Minister of India on February 28, 2013 while presenting the budget for the financial year 2013-14. The excise duty on mobile phones priced over Rs.2000 has been increased from the present 1 per cent to 6 per cent.