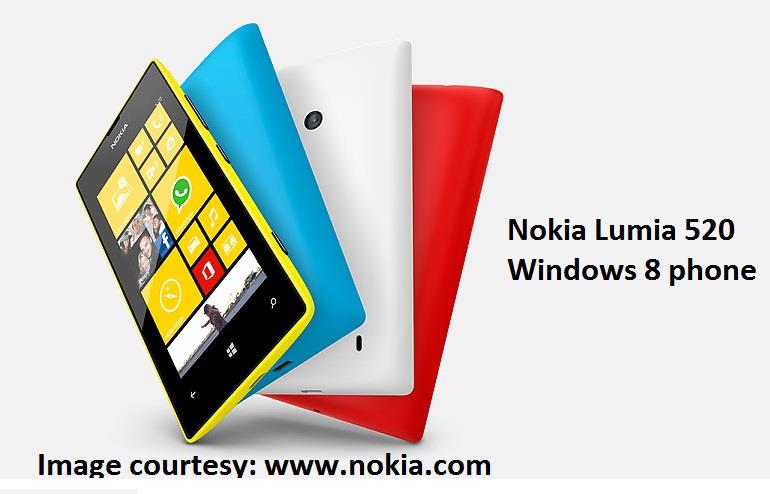 Nokia once used to be a lion, which some critics call a dead snake, now is perhaps rising from its slumber to compete with the market leaders, Apple and Samsung. After the success of its high end version Lumia 920, Nokia has announced two affordable smartphones with the names, Lumia 720 and Lumia 520, in February, 2013. The latest news is that the two phones will be available in the UK market from April 1, 2013, though some might think that the company is playing the April Fool joke on the phone lovers. With the budget proposals announced for 2013-14, the smartphones priced over Rs.2,000 are going to cost more, since the excise duty on smartphones above the price of Rs.2,000 is proposed to be increased from the present 1 per cent to 6 per cent. For example, the smartphone costing Rs.40,000 now will cost Rs.2,000 more with increased excise duty. It is not known whether the manufacturers will pass the increased costs on this account to the consumers or not. Therefore, let us now discuss the features and specifications of the affordable windows 8 phone Lumia 520 smartphone from Nokia which might cost around Rs.14,000 in India. However, it may not be released in India very soon. But keep a watch for its release date and try to grab a piece as soon as its release is announced. At Techulator, we shall keep the phone lovers informed about the latest development about the release of Nokia Windows 8 phones from time to time.

Important features and specifications of Nokia Lumia 520 Windows 8 phone are discussed below:

General features of the smartphone

The display type of Nokia Lumia 520 Windows 8 phone is IPS LCD capacitive multi-touch screen with TrueColour 24 bit and 16 M colours. The size of the screen is 4.0 inches or 10.16 cm with 233 ppi pixel density and a screen resolution of 480 x 800 pixels. The screen of Nokia Lumia 520 is protected with a scratch-resistant glass. The screen is a little bigger than the 3.8 inch screen of Lumia 620. However, the image is not reported as good as that of Lumia 620.

Sound and memory features of the smartphone

Nokia Lumia 520 Windows 8 phone supports the alert types of vibration, MP3 and WAV ringtones. A loudspeaker and 3.5 mm audio jack is provided. The smartphone has an internal memory of 8 GB which is expandable up to 64 GB via microSD card. This is quite a pleasing feature for the buyers of this phone as Nokia has not compromised on the storage features even when keeping the price of the phone low. RAM provided in the smartphone is 512 MB. It would have been better, had the phone been supported with 1 GB RAM. There is no radio facility in this phone.

Data and connectivity features for Lumia 520

The data and connectivity support for this phone is GPRS Class B, EGDE connectivity up to 236.8 kpbs, the data speed is HSDPA, 21.1 Mbps; and HSUPA is 5.76 Mbps. WLAN connectivity is though WiFi 802.11 a/b/g/n with dual band. For easy transfer of data and files, there is Bluetooth v3.0 with A2DP. The USB connectivity is through microUSB v2.0 USB port.

This Nokia phone has only the 5 MP primary camera fixed at the rear with features like autofocus, ¼" sensors and geo-tagging. The camera resolution is 2592 x 1936 pixels. The video recording feature of the camera is 720p @ 30fps.

Nokia Lumia 520 Windows phone is powered by Qualcomm MSM8227 dual core 1 GHz processor with GPU Adreno 305. Nokia has tied up with Microsoft, which has provided the smartphone with the Windows phone 8 operating system. The browser provided for the phone is HTML5. There are Accelerometer and proximity sensors in the phone. The messaging services are rendered through SMS (threaded view), MMS, Email, Push Emal and IM. There is a GPS support for the phone with A-GPS and GLONASS. Nokia Lumia 520 has no Java support.


Some other features of Lumia 520

Nokia Lumia 520 Windows phone has SNS integration. There is a dedicated microphone with active noise cancellation. The audio formats supported by the phone are MP3/WAV/eAAC+/WMA player and the phone supports the video formats like MP4/H.264/H.263/WMV player. There is 7 GB free SkyDrive storage provided for this phone. The smartphone is also provided with document viewer, video and photo editor, voice memo, dial and commands with predictive text input.

Price, availability and future upgrades of of Nokia Lumia 520

The price is not officially announced in India. It may be between Rs.13,000 and Rs.14,000 when released in India and can compete well with the recently announced Micromax A116 Canvas HD selling at Rs.13,990. It is not known when the Nokia Lumia 520 Windows 8 phone will be released in India. The phone is likely to be available in the UK market from April 1, 2013 at the rate of £141.66. The good news, of course, is that the windows 8 phones might be upgraded to the next OS release by Microsoft in future. Such facility was not available to the earlier versions of Windows phones.

The last word about Lumia 520