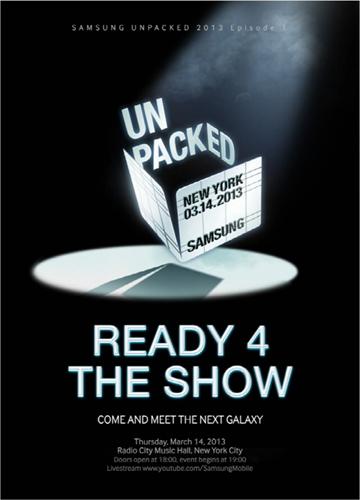 If too fascinated towards Samsung devices, you should not miss the upcoming Samsung unpacked event which is scheduled to be held on 14th March 2013 in New York. During the special occasion, Samsung would unveil the much anticipated Galaxy S4, the successor of the Galaxy S3 which was launched way back in May 2012.

The event will be watched by millions of Galaxy S4 fans through live stream, hosted at the official You Tube channel of the company. Samsung has already sold over 100 million smartphones which come under the Galaxy range hood. The sales of Samsung Galaxy S3 have gone past 40 millions in figures since its inception in 2012 making it one of the popular devices among the smartphone users.

Samsung's marketing department has taken a leap forward by sending printed invites and electronic invitation. The Galaxy S4 event would mark the first episode of Samsung Unpacked 2013 with more similar shows including the introduction of Galaxy Note 3 can be expected later. Other than the invitations send by email, media representatives who pay visit to the Mobile World Congress (MWC) would receive printed invites from the Samsung's booth. The complete package includes an invitation along with a Media card which can let the media representatives get inside.

Even though the Samsung Galaxy S4 launch event will take place exactly two weeks after MWC 2013 concludes, the company has confirmed the live streaming via its Youtube channel youtube.com/SamsungMobile on 14th March. According to some reports, the Galaxy S4 is expected to go for sale globally with 100 million units.

With the Galaxy S unveiled at CTIA 2010 in the United States, the Galaxy S2 got unveiled at MWC 2011 while the Galaxy S3 got out of the box at a special Unpacked event held at London in 2012. With the Galaxy S4, New York would be proud to host the event which in turn is likely to be most respectable market for the South Korean company. Being the most anticipated smartphone in 2013, the Galaxy S4 would have a good take off as soon as it gets uncovered.