Ubuntu currently released an Android compatible OS version named as "Ubuntu 12.10 Touch". They announced officially that this version will support all Nexus tablets. Unfortunately this version is not available for Sprint and Verizon Galaxy Nexus. Actually it is not a full OS, it's just a consumer preview version. To install Ubuntu in your Nexus device you need a PC with Linux OS (Ubuntu, Red Hat, Fedora, OpenSUSE, Debian etc). Make sure you have a power backup because this process takes a long duration.

For installing in Nexus device read official guide by Ubuntu.

Ubuntu installation in other mobile

To install Ubuntu in your Android mobile/tablet, first root your mobile. If your mobile is not rooted then read root tutorial first. Check that your device is capable to read .iso images. Most of the recent Android mobile is capable to read this format. If your device doesn't support this format you need to install latest custom ROM for your phone. Now proceed the tutorial below. 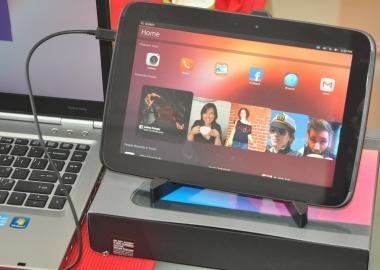 1. Download the file Ubuntu.zip and unzip it.
2. Copy all the extracted files to your Android phone/tablet.
3. Install Android SDK because you need adb.exe file.
4. Connect your phone/tablet to the PC using USB cable. Change your USB settings in Android to USB debugging mode.
5. Now you can see that your device is recognized as a ADB Device.
6. Open command prompt and enter the following command. The text after > symbol is command.
>cd \YOUR SDK PLATFORM_TOOLS LOCATION
To get the location just normally open platform-tools location and then copy the address in the browse navigation bar and paste it in command prompt. It will be something like
>cd \sdk\platform-tools
Then the next command is,
>adb devices
7. After running the above command it displays "List of devices attacthed". If it doesn't display any device then you need to install drivers for your mobile/tablet.
8. If the above steps were successful then you can proceed to the next command.
>adb shell
#su (This command will switch to super-user)
su
#cd /sdcard/ubuntu (This command opens Ubuntu directory)
#sh ubuntu.sh (Runs the ubuntu.sh script)
#bootubuntu

9. Now in the terminal you should be able to see "root@localhost:/#" - it means that you have successfully completed your installation process.

Following the above steps you have fully completed your Ubuntu setup in Android. Below, I have given the details to install apps in Ubuntu. Installing apps is similar to that you do in desktop. Before installing any app you need to run the below command first.

Now if you need to install any app just run the below command.

In the place APP_NAME, write the name of your app. Example if you are going to install Firefox then the command will be.


Note: All the commands given here should be entered in your PC while your Android smartphone is connected via USB cable in debugging mode.

Will this Ubuntu work on docking the mobile or tablet. The reason why I'm asking this question is that Ubuntu already released a version which can be installed as a app in android system. They also coming with a mobile OS it self.

I can't get you. Currently you can install Ubuntu as a secondary OS over the Android OS. What is docking?

Docking is a process by which you connect the smartphone or tablet with external display by a suitable cable. So that the platform of the smartphone will load up to screen, this method is initially presented by Motorola in there atrix series. where docking that android phone will boot a preinstalled Ubuntu OS to the display and the phone will the CPU.

So does this install Ubuntu as a secondary OS? Or main OS?

Is there a UI for Ubuntu OS or is it just the terminal???

Can I install Ubuntu on Canvas4 a210? If yes, please guide me on how to do so.