Insomniac Games who is known for creating and developing video games only for Sony's PlayStation gaming consoles has now shown interest in developing games for other gaming platforms as well. Outernauts is such an effort by them and the first step towards this direction. Electronic Arts (EA) is the publisher of this game which is developed for Facebook. The game was released in July 2012 as open beta. The game is basically a role playing action game which may appear similar to the famous Pokeman game series.
Pros and Cons
Pros: The graphics, sound and user interface of the game is awesome. One will not get disappointed with the look of the game. And it is one of the few such games that is available on facebook.
Cons: It is similar with the popular game series Pokeman.

My Rating to the game
My rating for Outernauts game is 7 out of 10. 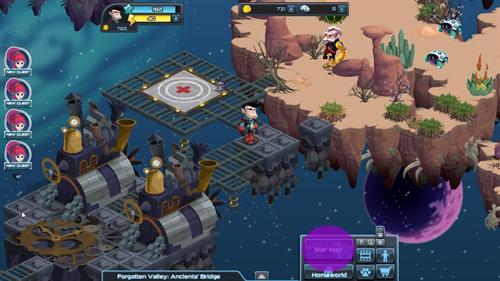 Outernauts is a role playing game where the player explores different worlds and battles monsters like creatures to capture them. As the player successfully captures any monster, they can train and use these monsters to fight against other monsters. The players can also construct buildings at the home planet as their level goes up. You explore the galaxy and unlock various planets by waiting or spending real money. The players may find it difficult and time consuming to unlock these equal to unlimited planets because the players each action consumes some amount of energy. And it takes time to build or produce energy. Even after a week's playing the player may feel that he/she have not even explored a small portion of the galaxy until you spend some money to unlock the planets by purchasing the currency called as Star Gems in the game. Or one can also use 'Friend Energy' which is available to the player only when he/she visits their friends home world(This is only in case his/her friend is also at the same level as the player).

The most satisfying and praiseworthy feature of Outernauts game is its User Interface. The player will not need to sit and think what his/her next move is or how to advance in the game. Everything is well explained and narrated in the game. There are easy to understand controls which helps the player in resource management. Whenever we hover the mouse pointer over any icon in the game, a detailed description of that controls appears as text. The information regarding the status of the game like level, energy, fuel, etc. is laid out clearly at the top of the game's screen. The graphics and sounds uses in the game are of good quality and intelligently used. So I have only one view regarding the User Interface of this game and it is an 'Extremely nice user interface'.

You’ve checked your download speed and PING, but those aren’t the only factors that online garners should consider. There is another important variable — jitter. Find out more about Jitter in the following article.

Read this article to know abou the best available Free online games to play, along with it's features and reviews.

2015 is almost upon us. Unlike this year, though, the next year is going to be packed with games. There are a few games that you may not now about. Here are some of them you need to play next year.

Read about the top 5 Family games on Facebook. Know the features of these games and what all they have to offer to you. Read its short review and decide the best game for yourself among them.