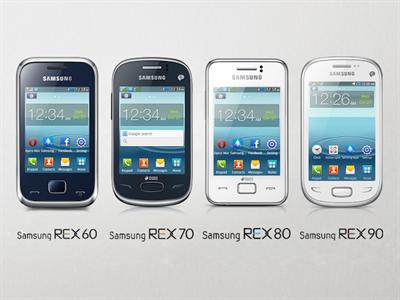 With an aim to advance mobile communications in emerging markets easily accessible through feature phones, Samsung Electronics Co., Ltd, known for its innovative products, has announced the REX series mobile devices at a press conference held in Delhi. After Nokia Asha series phones gathering enormous support from Indian phone lovers, Samsung would like to compete against its arch rivals with the REX series phones - REX 60, REX 70, REX 80 and REX 90, exclusively for the Indian market. Running on Java operating system, these phones are loaded with the TouchWiz UI. Priced between Rs.4,280 and Rs.6,490, the REX series phones will deliver next-generation mobile experience for all.

The REX devices are equipped with the essential mobile functions, which can bring an extraordinary end-to-end mobile experience for the customers, giving the best value for money. Designed to perfection, each device will be entitled to have a variety of unique features, which suits for the current lifestyle. Samsung has taken an advance step merging the most advanced functions, which can deliver practical solutions to daily mobile needs. The QVGA touch-screen user interface will deliver a simple and intelligent user experience for its users.

The majestic feature of the REX series would be its Dual SIM support. The REX 70 and REX 90 offer 'hot swap' for the SIM cards without restarting the phones. Being developed in India, the REX devices would reach the shores of other countries too. The phones come preloaded with Facebook, Twitter, ChatOn, Google Talk and other messaging and social apps. 10 full version games from Gameloft are being preloaded with the devices. Samsung App Store facilitates users to download free apps onto REX 70, 80 and 90 devices.

With around 653 million feature and entry-level mobile phones sailing globally, it gives a huge opportunity for handset makers to combine the best features available at a comfortable price.

The REX 60 sports a 2.8-inch QVGA responsive (resistive) touch display, a 1.3-Megapixel camera, pre-installed apps, a microSD card slot which supports 16GB of memory and a 1000 mAh battery promising up to 15 hours of talktime.

On the other hand, the REX 70 features a 3-inch capacitive QVGA display, a 2-megapixel shooter; Dual SIM and true hot swap feature which facilities to change SIM cards without switching the phone off. The phone supports a microSD card slot, supporting 32GB memory. A 1000 mAh battery, which can provide talk time up to 13 hours comes along with the phone.

The REX 80 is equipped with a 3-inch capacitive display 3MP camera, Wi-Fi, TouchWiz UI with 8 customizable home screens and a 1000 mAh battery with a talk time up to 14.7 hours.

The REX 90 is having a 3.5-inch capacitive display, 3.2MP camera, Smart Dual SIM and true hot swap features. For connectivity, the phone boasts of having a USB 2.0 Host, Bluetooth v 3.0 and WiFi. The 10MB user memory can be expanded to 32GB using a microSD card. The 1000 mAh battery can provide 15 hours of talk time. FM radio tuner and FM recording support are being provided with all the models. My Movies, music and live TV services come along with the REX 90 model.

Samsung REX series will be a tough competitor for Nokia Asha Series.